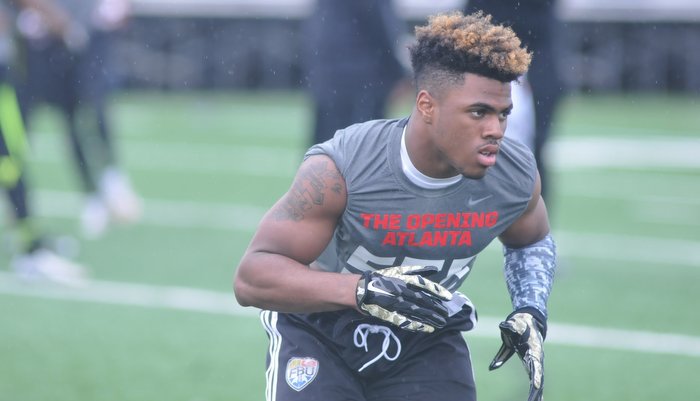 Williams works out at the Nike Combine

One of the top athletes in the state of Georgia for the 2017 recruiting cycle is projected by many to play defensive back at the next level, and Jamyest Williams

Jamyest Williams
Athlete
5-9, 170
Lawrenceville, GA
View Full Profile knows all about Clemson and its reputation for turning out top corners.

Late last month at Nike’s The Opening Combine in Atlanta, Williams took top positional player honors at defensive back and figures to be one of the more coveted players during the 2017 cycle. He doesn’t, however, have a list of favorites.

“They kind of stand on even ground right now. I really don't have a favorite,” Williams told TigerNet.”I just take the process slow and enjoy the process. Clemson is a great school though, great coaching staff. I enjoy talking to Coach (Mike) Reed and Coach (Tony) Elliott.”

Williams said he also recognizes that Clemson has a special secondary coach in Reed.

Williams also said he has taken notice of Clemson’s Mackensie Alexander, the corner who garnered freshman All-American honors last season. He even thinks his game mirrors that of Alexander.

“Oh yeah. I look at McKenzie Alexander. We are just alike,” Williams said. “I talk to him all of the time. His technique is so good. He's just a dog, a full-blooded dog. The games he played against Louisville and South Carolina last season really stood out to me.”

What else stands out about Clemson?

“The relationships they have and how much the coaching staff cares about the kids,” Williams said. “How they care about my family - how my dad is doing, how is my mom. That type of thing.”

Williams visited Clemson for the Tigers’ win over South Carolina last November and hopes to make a return trip at some point during the spring or summer. Until then, he will keep looking for the perfect school.

“The perfect school for me is built around the kind of relationship I have with them, the academic programs they have and how they connect with me and my family,” he said. “This won’t be just a football decision – it’s about life and how they are going to make me into a man.”