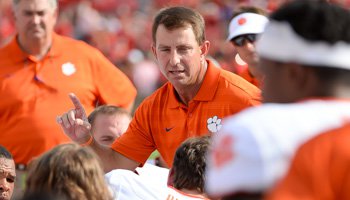 Swinney said there is still plenty of talent on the roster despite the losses.

Dabo Swinney
Head Coach
View Full Profile or the Clemson football program. They are going to be just fine.

Korrin Wiggins
Jr. Defensive Back
#12 5-11, 195
Durham, NC
View Full Profile tore his ACL a few weeks ago and will miss the season; add in Reader and the Tigers are struggling to find experienced bodies to put in the field.

Swinney laughed at that notion, however, and said the Tigers have been through this situation before.

“All I know is that we had 42 freshmen in 2011 and won the ACC. That's all I know,” Swinney said with an obvious edge. “ Grady Jarrett

DeShawn Williams
Defensive Tackle (2011 - 2014)
#99 6-1, 295
Central, SC
View Full Profile and all of those guys were freshmen. They had to play and played a lot for us. I really could care less. All I know is that we're going to be judged on what we do this year. I'm not worried about that at all. I'm worried about beating Wofford. We'll be ready to play. That I can assure you. We'll be ready to go.”

Swinney didn’t mention any teams or rivals in particular, but said that having a big number of returning starters isn’t a guarantee of success.

“You can have 20 starters back, but they might stink. I'm just telling you the truth,” he said “There are some bad teams out there with a lot of starters back, and they're probably not going to be very good again.”

He then added that the Tigers won’t make excuses for this season because he thinks there is still plenty of talent on the roster.

“Who is taking their place? Okay, Vic Beasley

Shaq Lawson
Jr. Defensive End
#90 6-3, 269
Central, SC
View Full Profile steps in. Shaq Lawson has started one game in his career,” he said. “All I know is we have good players and we aren't making any excuses. Don't look for any excuses from us at Clemson. We're good enough to win. Is it a challenge when you have inexperience? Absolutely, but that's not an excuse. We've recruited well. Let's coach them up and let's go do the best we can. I don't measure our success based on our record or the scoreboard. Other people do, but I don't. I know what our commitment is.

“I know what our work ethic is. I know the improvement that guys are making. That's what I pay attention to. Whether that's 15-0 or 8-4, I have no idea. Things happen. That's how I evaluate it. It's not as black and white as some people on the outside see things. They just don't know what's going on within our walls and on that practice field. We'll be evaluated in November. We'll look back and see if we had a good year or an average year or great year. My expectation is to be a great football team and have a great year. I love the mentality of our team. I love the chemistry. I like the resolve. I like the focus. This is a team that's going to come ready to play.”

Carlos Watkins
RS Jr. Defensive Tackle
#94 6-3, 295
Mooresboro, NC
View Full Profile . Don't feel sorry for Dan Brooks,” he said. “He's got plenty of talent and he's loving every second of it. He'll have them coached up and ready to go. These are good players. We'd be struggling if we had a bunch of guys that were average. We've got good players that will be ready to play. They'll be excited to play.”

“We have a ton of studs. All we do at Clemson is reload. We've got 5-star defensive tackles all over the place. So that is a position we are going to be ok at,” Mac Lain said. “I really think and I have said numerous times that it is going to be just like 2011. We have a bunch of freshmen and redshirt freshman that nobody knows about that are going to take this league by storm - Albert Huggins, Christian Wilkins, Jabril, all these guys.”