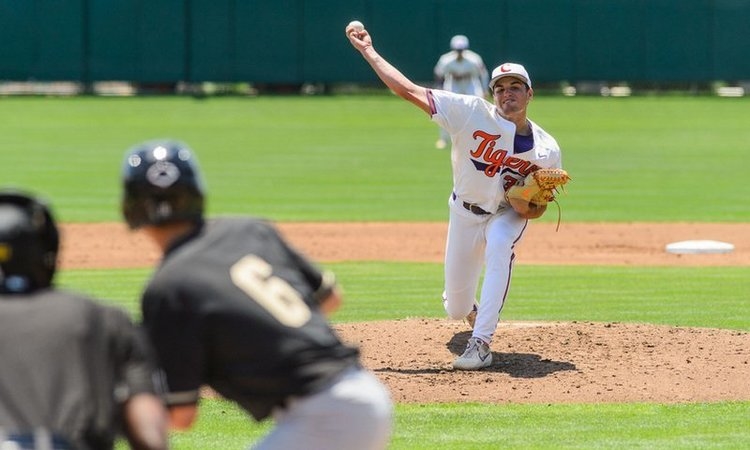 CLEMSON - Clemson’s spot on the NCAA Tournament bubble going into next week’s ACC baseball tournament was assured with a 14-5 loss to Wake Forest on Saturday.

The Tigers (33-23, 15-15 ACC) were seeking a first series sweep since March and a winning record to finish the ACC regular season. Instead, a couple of innings gone wrong had Clemson in trouble into the late-going at Doug Kingsmore Stadium and a potent Demon Deacons lineup pounced on them from there.

Clemson jumped on top first thanks to a two-run, line-drive homer to center field from shortstop Logan Davidson. Davidson extended his on-base streak to 53 games with the effort.

After settling down over the next couple frames, Sharpe (6-4), who came in with a 2.85 ERA, gave up three-straight singles to get chased in the sixth. He finished with a final line featuring seven hits, seven earned runs and four walks. Clemson coach Monte Lee moved back Sharpe’s start a day after some soreness after his previous start.

"Davis wasn't at his best. He had the one inning in the third and then we had to get him out in the sixth," Lee said, "but he had some bright spots in there. Four of his innings, I actually thought he threw pretty well. Davis needs to be at this best. We've got to find three guys who are going to give us quality starts.

"Hopefully with Matty (Clark), (Jacob) Hennessy and Davis - we had to push Davis' start back to today because he's been a little sore. Hopefully those three guys will give us quality starts in the ACC tournament."

Wake’s sixth inning featured six singles in total to put five runs on the board. The Demon Deacons totaled 18 hits in all, which was the most Clemson had surrendered all season.

Clemson cut into that advantage a bit in the bottom half of the frame, with left fielder Chad Fairey getting two runs back on a home run to right field. Wake Forest right-hander Ryan Cusick (7-3) went six innings in all and allowed four earned runs on four hits with three walks and five strikeouts.

The Deacs put the game away in the eighth with another multi-run effort, anchored by a three-run shot to left field from third baseman Bruce Steel.

"Today was frustrating to say the least," Lee said. "Didn't play well in any phase of the game. Pitching-wise we needed to be good and we were not. Offensively, didn't think we did a good enough job of sticking to our plan. Especially with two strikes. Have to give Cusick credit, he did an outstanding job...We've got to do a better job of competing with two strikes...Too many easy outs today. We hit three home runs and that was pretty much the highlight offensively."

Clemson senior first baseman Grayson Byrd did continue his power streak at the plate in the eighth with a solo shot to right field. It was his 10th home run in the last 13 games - one in each game of the ACC regular-season finale series.

Wake's Frick went 5-for-6 on the day with four runs scored and two RBIs.

The Tigers return to action in the ACC Tournament next week in Durham, North Carolina, with its schedule to be released this weekend.

"We've got to turn the page," Lee said. "We've got to be ready. It's a new season now. Hopefully we can find a way to be a little bit better going into the ACC tournament."