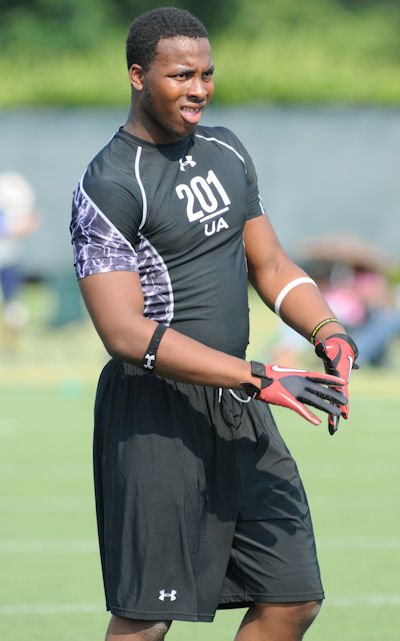 Nick Dawson
Linebacker
6-3, 228
Charlotte, NC
View Full Profile can't decide on whether he wants to be a Clemson Tiger or a Louisville Cardinal.

Luckily, the 6-3, 238-pound linebacker out of Charlotte’s Berry Academy says he still has a while before he makes his decision.

Germone Hopper
Athlete
6-0, 175
Charlotte, NC
View Full Profile told TigerNet Saturday that he is going to make his decision at the U.S. Army All-American Bowl, for which he was chosen this week.

“I don’t know yet, I just haven’t made my decision,” Dawson said. “I am going to make it at the U.S. Army game. It is a great honor to be chosen to play in that game. That is every high school player’s wish. I am excited to get that opportunity and I am going to take it to heart and do my best in that game.”

Travis Blanks
Defensive Back
6-1, 180
Tallahassee, FL
View Full Profile , another Clemson verbal, are also going to be in that game, and Dawson said that he hears from his teammate and the other members of Clemson’s 2012 class daily.

“Every day, he tells me he wants me to come to Clemson,” Dawson said. “When we were out in Oregon for The Opening [hosted by Nike], they all were talking to me about coming to Clemson. I love Clemson, but I wasn’t ready at the time.”

Dawson said he likes the program at Louisville and has built a strong relationship with head coach Charlie Strong, a former defensive coordinator.

“I just like the way their program is run,” he said. “I like that school all around. Coach Strong, he just keeps it real all the time. He isn’t fake or anything like that.”

"Coach Steele taught me a lot of different techniques and stuff I haven’t seen before,” he said. “He also told me they play more of a 3-4 defense now. I could play middle linebacker and outside linebacker. I could be a run-stopper in the middle and I could get sacks from the outside.”

“They sit number one in a tie with Louisville,” Dawson said of Clemson. “Clemson is like family. I love the atmosphere and the people and the players. I just like it all around. Clemson and Louisville are the same for me. I am just waiting to see what is going to be the best for me.”

As a junior, Dawson had 113 tackles, five sacks, six forced fumbles and an interception. As a sophomore, he had 93 tackles and six interceptions.