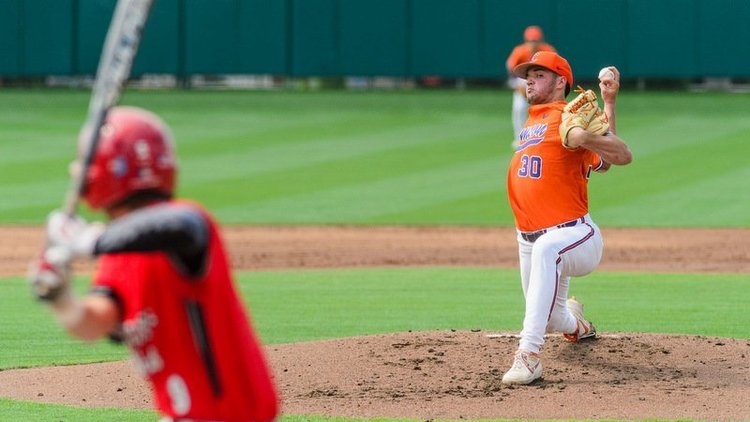 CLEMSON – A little home cooking never hurts, especially when you’ve been on the road for the better part of a month.

Head coach Monte Lee served his one-game suspension after an incident at Georgia Tech last weekend. Pitchers Holt Jones and Sam Weatherly each served the first game of a four-game suspension stemming from incidents in the same game.

Davis Sharpe started for the Tigers and picked up the win, pitching 5 2/3 innings, giving up two runs on three hits while walking two and striking out six. Sharpe improves to 6-3 with the win.

The scored stayed 2-0 until the big inning in the fifth.

Wilkie and Bryar Hawkins each singled to start the frame and Jordan Greene walked to load the bases. Wilkie scored on Justin Hawkins’ fielder’s choice grounder to third, and Sharpe followed with a bouncer through the left side that scored Greene for a 4-0 lead. Bryce Teodosio laid down a perfect bunt that scored Hawkins to make it 5-0, and Sam Hall followed with a sharp single to center that scored Sharpe and moved Teodosio to third.

That brought up Davidson, who cleared the bases with his homer down the left field line and the Tigers led 9-0. The homer was his 13th of the season.

Gardner-Webb added two runs in the sixth to chase Sharpe.

Clemson hosts Presbyterian Tuesday and The Citadel Wednesday this week, with both games starting at 6 pm, then return to ACC action with a three-game series at NC State next weekend.

Clemson vs Gardner-Webb Box Score
Comment on this story