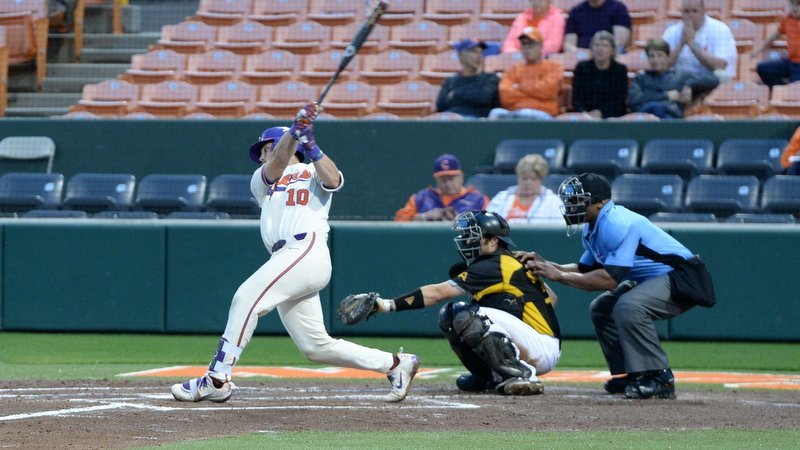 Kyle Wilkie connects on a homer

Clemson, which improves to 30-11 on the season, also got a homer and two hits from Kyle Wilkie. Spencer Strider pitched 2 2/3 innings of scoreless relief to pick up the win and improve to 4-1 on the season. The Tigers had 11 hits and took advantage of ten Owl walks.

It didn’t take long for Clemson’s offense to put runs on the board. Kier Meredith walked to lead off the bottom of the first and he scored just two pitches later. Davidson connected on an 0-1 pitch and launched it 409 feet, into the Chapman Grandstand, for a 2-0 Clemson lead. The homer was Davidson’s seventh of the season.

Seth Beer walked on five pitches, Wilkie singled and Grayson Byrd walked to load the bases. Patrick Cromwell drew a bases-loaded walk on a 3-2 pitch that scored Beer for a 3-0 lead and Drew Wharton later added a sacrifice fly to right as the Tigers jumped out to a 4-0 lead.

Two walks, two singles and a balk helped the Owls take advantage of starter Sam Weatherly’s wildness and they scored two runs in the third that made it 4-2.

The Tigers added three in the bottom of the frame. Wilkie smacked a 1-2 pitch over the wall in left for his third homer of the season and a 5-2 lead. Cromwell followed with a single and advanced to second on a wild pitch, then scored on a single up the middle by Drew Wharton.

Wharton advanced to second on a wild pitch, moved to third on a fly out by Jordan Greene and scored on Meredith’s groundout as the Tigers took a 7-2 lead after three innings.

The Owls chased Weatherly with two more runs in the fifth, and he was replaced by Spencer Strider. Strider got out of the inning without further trouble, but the Owls trailed by just three at 7-4.

The Tigers added a run in the fifth. Cromwell led off the inning with a walk and came around to score on Davidson’s bases-loaded walk that made it 8-4 through five innings.

Davidson was a part of another run in the seventh. Wharton started the inning with a single but was picked off of first base. Greene singled with one out but was out at second on Meredith’s fielder’s choice. Meredith advanced to second on a balk and scored when Davidson lined a single to right. The ball was kicked by the right fielder and Davidson wound up at third on the play.

Clemson vs. Kennesaw St. box
Comment on this story

No. 25 Tigers sweep Virginia in Saturday doubleheader
Post your comments!