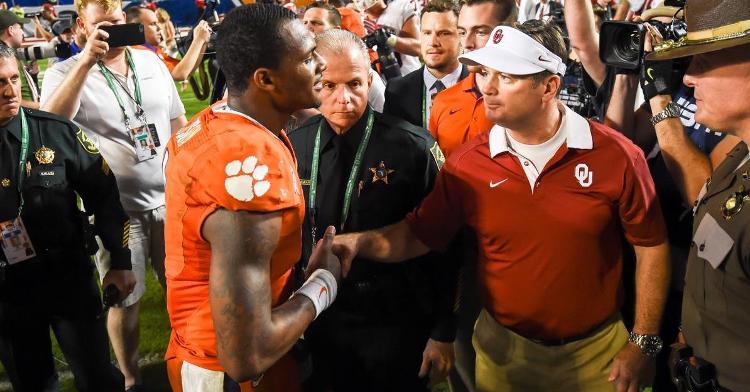 Yesterday we took a look at No. 8., Clemson’s big win over Notre Dame in the rain.

Clemson knew it belonged on this stage but not everyone was so sure going into the Tigers' College Football Playoff debut in 2015. The nation's only undefeated Power 5 conference team went into a second-straight postseason matchup with Oklahoma as an underdog in the Orange Bowl.

The last meeting with the Sooners in the Sunshine State went decidedly in Clemson's favor, where the Tigers dominated from start to finish in a 40-6 win under the command of under backup quarterback Cole Stoudt. With dynamic new starting QBs on both sides, in Clemson's Deshaun Watson and Oklahoma's Baker Mayfield, the Sooners and their No. 1-ranked scoring offense were given the slight edge going in.

Oklahoma was confident coming in too and had their say in the pregame media hype, with comments ranging from confidence in limiting Deshaun Watson's impact on the game to vowing they would not be embarrassed again.

Clemson had the final say on the field, however, with a dominant second-half shutting out Oklahoma on the scoreboard and limiting the prolific attack to 3.8 yards per play as Watson and company put the game away. Brent Venables, the former Oklahoma defensive coordinator, said his guys "felt slighted" by the Sooners leading into the game and they had "a real edge to them."

The next game would be the first in a couple classics with Alabama in the national championship under Swinney but this win signaled Clemson was a serious player for the final No. 1 ranking that would come two of the next three seasons.

Clemson led 23-17 in the third quarter of what until then had been a back-and-forth contest. The Sooners were driving and faced a 4th-and-1 at the Clemson 30-yard line and elected to go for it. Big running back Samaje Perine took the direct snap, ran up the middle, and was stuffed for no gain.

It’s interesting to note – a freshman named Austin Bryant was forced into action because of the injury to Shaq Lawson and made the initial hit on Perine. Another freshman, linebacker Kendall Joseph, was second to the ball carrier and forced Perine to the ground.

That was Oklahoma's last gasp - Clemson scored another touchdown four plays later. The corner was beaten on a short route by Hunter Renfrow (remember that guy) and slipped to the turf, and the result was a 35-yard touchdown to put the Tigers up 30-17.

Baker Mayfield became Interception Mayfield the rest of the way and Tigers were on their way to the National Championship.

Oklahoma entered the game averaged 52 points per game since an early October loss to Texas. A large part of their success was Perine and the running game, and he tallied 33 yards on the first drive of the game. After that, he had just 25 yards on 10 carries and spent time on the sidelines with an injury. The Sooners ran the ball 33 times for a measly 67 yards, while Clemson ran it 58 times for 312 yards. Wayne Gallman had 150 yards on 26 carries and Deshaun Watson had 145 yards on 24 carries.