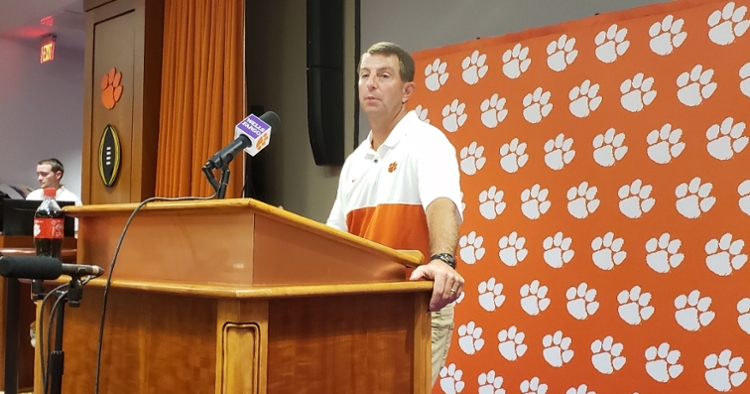 CLEMSON – The ROY bus is out of the shed and back on the road.

Clemson head coach Dabo Swinney made light of the media’s fascination with Alabama last season by saying the Tigers were on the ROY bus – or Rest of Y’all bus. Even though Clemson is 5-0 and started the season ranked number one, Alabama has overtaken Clemson for the top spot and Swinney is once again delighting in driving the ROY bus.

Swinney made the comment during his Tuesday press conference that he spent the open date getting the bus back on the road.

“I like it. I am glad that we have people that have an opinion on Clemson. That's great,” Swinney said. “That means we matter and our program matters. It's good that people are talking about Clemson, good or bad. 'Aww, they stink.' Whatever. It doesn't really matter. What matters to us is really playing well.

“Great break for us. It really was a good break. I think everyone needs a break every now and then,” Swinney said. “Enjoyed some family time and did some stuff and really watching football...It was fun to watch some games and see other teams, especially teams that maybe you don't get to see quite as much. Stayed up too late watching a couple of the games. A fun weekend. Just excited to get back at it.”

Swinney said the Seminoles are talented across the board.

"Florida State is the most talented team we have played. All you have to do is check the recruiting class rankings if you believe in that stuff,” he said. “They've beaten us in recruiting in five of the last six years. They are easily the most talented team we have faced to this point. On paper, roster, they're the most talented. They're getting better, too. They should be 5-0. I'm sure they are disappointed over what happened against Boise State. They were up at around 30-13 late and blew it. Same thing against Virginia. They had a chance to win that game on the road. They are truly two or three plays from being 5-0."They have started to create an identity. They're really fast. They're physical. They're running the ball better as far as what they're trying to do. Cam Akers ... everything goes through him.

“He is a very committed runner. We have to match his physicality and mindset because this guy is a committed dude. He just keeps coming and they just keep giving him the ball. They are RPO-oriented, tempo, double-moves and they are better up front. They struggled there last year. They are much improved. They've had to play two quarterbacks, but both can win for them. Both are experienced. Both will run the offense.”

"Defensively, they are huge up front. No. 11 is a special player. He is very talented and has the ability to pressure the passer,” he said. “They're all big, big guys who are hard to move. They've done a nice job. They have created a lot of turnovers. What has hurt them is they have had a lot of penalties. They've also overcome a lot of that because they are +5 in turnover margin. We're minus 1, so we have to take care of the ball. And we didn't create a turnover at North Carolina. We win the turnover margin, we will win the game. Simple as that. And vice versa.

“This is my 17th Clemson - Florida State game. It never gets old. This is one of those games that has settled the division and has represented the Atlantic. We have 39 more days before the division will be settled, so every day is important. This is a huge game. We both want the same thing. The winner is in control of their division destiny. This is playoff football. That's what it is every week. We need our fans to show up and continue to give us that incredible environment."

The Tigers are healthy heading into the game.

"Very clean injury report yesterday. Guys were feeling good,” Swinney said. “Blake Vinson is gone. Everyone else is back and ready to go."