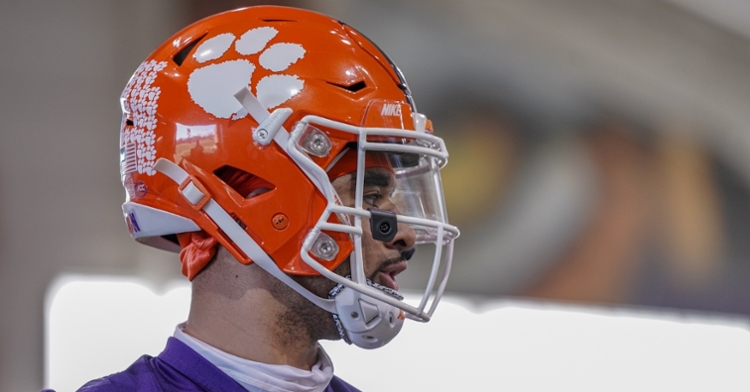 Uiagalelei is ready to take the reins of the Clemson offense. (Photo courtesy CUAD)

DJ Uiagalelei walked onto the practice fields at Clemson last spring and he watched the tall, lanky quarterback destined to be the No. 1 overall pick in the NFL Draft. Uiagalelei watched how Trevor Lawrence acted on and off the field, how he composed himself in the classroom and in the team meeting rooms, and how he interacted with the community at large. And he learned.

Uiagalelei enters this spring as the probable starter for the Clemson football team, and he knows there are still lessons to be learned and work to be done. He told the media following Monday’s practice that he is always working on his footwork, working on his leadership abilities, and learning the playbook.

Uiagalelei knows there is pressure that comes from being the starter at quarterback for the Tigers, a position that has seen Tajh Boyd, Deshaun Watson, Kelly Bryant, and Lawrence win big games. There is an expectation of greatness, and Uiagalelei said he only had to watch Lawrence last season to learn how to handle that pressure.

“Probably the biggest thing I took from him is how he handles everything. The way he is as a man and how committed he is to his faith and how committed he is to being the best person on the field and off the field and how he relates to everything and how he is on time for everything,” Uiagalelei said. “He is always on time for school and gets his schoolwork done. How he is always there to be accountable to everybody. You saw him, and everyone knew he was going to be the No. 1 pick in the draft coming out of high school and then after his freshman season winning the National Championship. To be able to play three seasons with that much pressure and for it to not phase him is a true testament of his faith and how he was raised by his parents and the great job Clemson has done.”

Uiagalelei said Lawrence leaned on his pupil last week. Lawrence is in California rehabbing his surgically-repaired left shoulder and preparing for the draft, and he texted Uiagalelei to find out the name of a good restaurant in Santa Monica. Uiagalelei sent him to a seafood restaurant on the pier (The Albright), happy to repay Lawrence for lessons learned last season. This season, the coaches have told Uiagalelei they want him to show the same accountability Lawrence showed during his time at Clemson.

“They want me to become the leader of the offense and know the playbook and all the checks,” Uiagalelei said. “They want me to lead on the field and be accountable and be like Trevor was, and when the going gets tough, be the most accountable guy on the team.

He said he knows the key is being consistent with his actions.

Uiagalelei started two games last season – a comeback win over Boston College and the loss at Notre Dame – and said those games prepared him for this moment.

“Being able to start two games and being able to play the whole game against Notre Dame got me ready for what is coming up this season,” he said. “I felt like it was a great opportunity to be out there and play and just be the leader of the offense.”

Helping his cause is freshman receiver Beaux Collins. Collins and Uiagalelei teamed up to win a state championship at St. John Bosco in California in 2019.

“It's been a year since I've played with Beaux, but having him out here at practice has been exactly the same. Just playing with him in high school and having that comfortability with him and throwing to him today has been great,” Uiagalelei said. “We built a great chemistry back at Bosco and having him here at Clemson is all I could ask for. He is doing great out here and picking up the offense and he is doing really, really well at practice.”