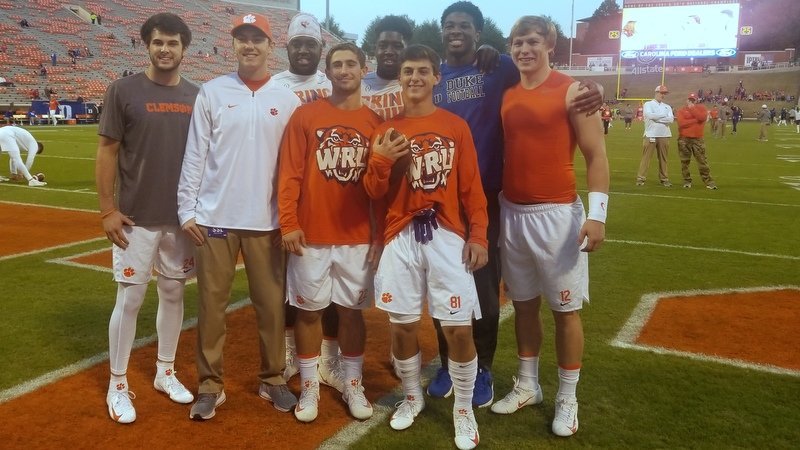 The group takes the picture before Saturday's game

Ten years ago, during one of head coach Dabo Swinney’s first summer youth camps, the sons of several staff members (and a former Alabama teammate) posed for a group photo. A decade later, that photo was recreated.

Young Drew Swinney holds a football, and the smiles are huge, the smiles of kids who are growing up in a playland of college football stars, well-manicured fields on which to play, and the game of football. None of them know what the future holds, but they don’t care – at the moment it’s all about their friends and the game they love.

Kathleen Swinney grabbed the young men and re-created the photo in the West end zone before Saturday night’s win over Duke.

“It was funny - before the game, my wife re-created a picture,” Swinney said. “We had a picture from camp when they were kids and in that picture were my sons, Danny Pearman's son Tanner, Chris Rumph, and Nolan Turner was in camp that summer, along with Joey's son Ben. Kathleen got them all out there before the game and they re-created that picture. Pretty cool. Those guys have all kept in touch.”

Swinney said it was good to see Rumph, Jr.

“I was around him a ton when he was growing up,” Swinney said. “I coached him in baseball. He played baseball for me for several years and grew up with Will and Drew. and I got a chance to see him after the game. He came up and found me after the game and gave me a big old hug. I am proud of him. As he continues to develop in the weight room I think he is going to be a very good player for Duke for sure.”

Rumph told TigerNet it was an emotional night. 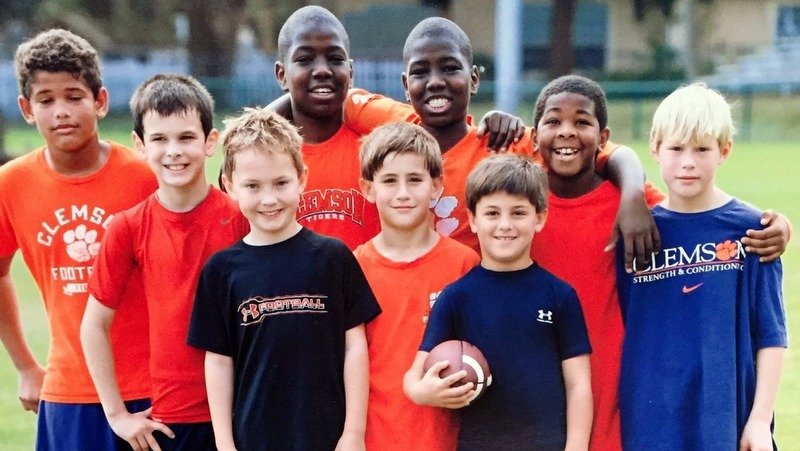 The picture taken ten years ago at camp

“It was a very weird feeling but at the same time, it was good to see everybody. So many emotions just came back,” Rumph said. “I haven’t been here in like six years. We tried to do everything same - arms and everything (in the pic). It was good to see everybody and go back through childhood memories. It’s kind of like my second home. I grew up here as a kid, went through elementary and middle school, so I know everybody on the staff, especially Coach Dabo and Mrs. Kathleen, Coach Pearman. It was just great to see them.”

As Will Swinney walked onto the field, Rumph yelled, “Hey there TD!” in reference to Swinney’s recent touchdown, showing he keeps up with the Tigers.

I keep up with them a lot. When I was in high school, we used to go skiing with them every year, so I would see them every year after Signing Day,” Rumph said. “To have those relationships from elementary school all the way until now, it’s a great thing to have, especially with the great staff that they have over there. Everybody treats you as family.

“It was weird because I go back to when I was a child and I was on that sideline and it’s like, ‘Dang, I want to be one of those guys now.’ I am one of those guys but on the other side. It was good. It was bittersweet at the end. We want to win but at the same time, it was good to see everybody. I enjoyed it back here.”