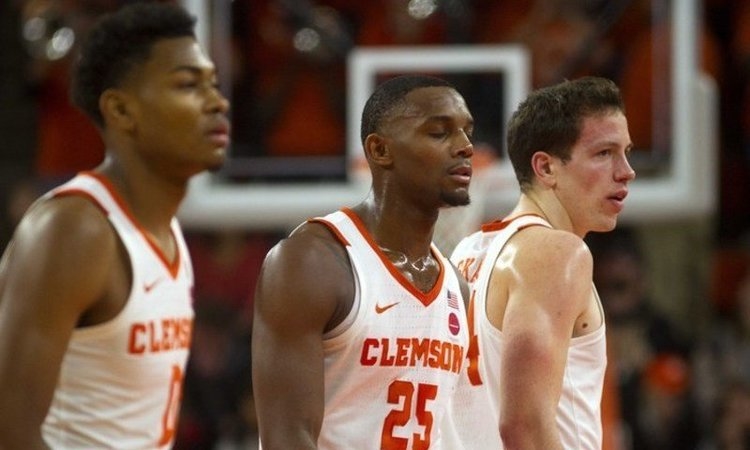 Early second-half energy only went so far for Brad Brownell’s Tigers as the No. 4 Virginia basketball team pulled away to a 63-43 win.

Clemson dropped to 0-3 in ACC play for the first time under Brownell, after going winless on road trips to No. 1 Duke and Syracuse in the past couple weeks.

The Littlejohn Coliseum crowd was in a celebratory mood with many coming in from the Clemson football National Championship parade on Saturday morning but that only carried over so much in atmosphere. With the game closer around the half, Clemson football coach Dabo Swinney and his team even energized the crowd with a halftime appearance and speech that seemed to improve things early in the second half.

Clemson’s senior-laden roster carried some momentum out of the half with four quick points from center Elijah Thomas to cut the deficit to two points, but that’s when the Cavaliers’ offense hit another gear.

Virginia (15-0) hit five of its first six 3-pointers in the second session, while Clemson countered with one 3-point make in the first 30 minutes of the game to trail by 18 with 10 to go.

"You have to score to get the crowd going," Brownell said. "And our crowd wanted to help us so much. We had a fantastic turnout. We're extremely thankful the way our students were there early. But it's hard to cheer for defense in basketball. It's easier in football when you get a sack or an interception. Just keep getting stops and people kinda get to the edge of their seats and they need a dunk or open three to go in to get them to really go. We could just never get them to do that.

"And obviously some of that is Virginia. They're sound defensively. They don't give you anything easy. They don't turn the ball over...We did have our fair share of open shots and layups around the rim - somebody on our staff counted seven that we missed. We got to make five of those and that's 10 points. All of a sudden the game is different because there's game pressure. We just didn't get it done."

Clemson (10-6) trailed by as much as 12 points in the first half due to cold shooting overall from the field, but the Tigers’ effort from the free throw line kept them in it - cutting the deficit to six by making 10-of-12 free throws at the half.

Marcquise Reed led the Tigers with 14 points, as the only double-figure scorer - eight of those points coming on free throws with 3-of-14 shooting overall. Kyle Guy (13), De'Andre Hunter (12) and Jay Huff (11) scored in double-figures for Virginia.

"At the end of the day, the No. 1 thing I think you coach with players is effort," Brownell said. "That's attitude and you're not competing that is a poor attitude. That's why I was upset with our team in the second half of Duke game. I thought we played fine in the first half but once the avalanche started - we did not regroup. Our last two outings, so five of the last six halves - we've played really hard. We just haven't played well enough to win. When you play two top-5 teams that's going to happen and when you play at Syracuse - that's something that's going to happen sometimes to. That's something you better get figured out and we're trying to work on it.

"For the most part we did some good things today and now we have to figure a way to continue that and win a game and execute a little better."