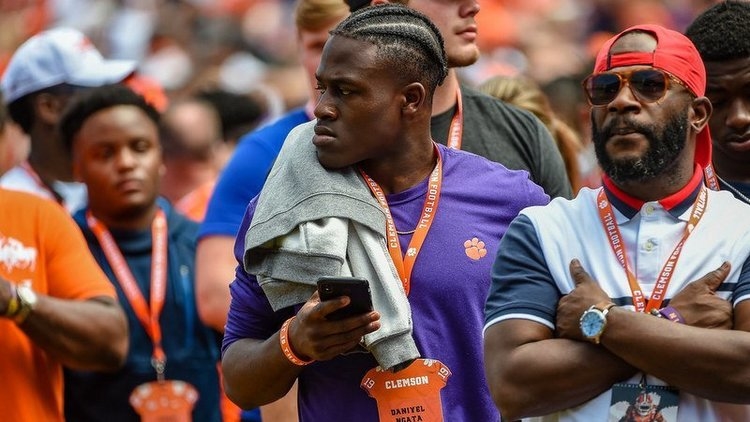 Ngata on the Clemson sidelines at the spring game

California playmaker Daniyel Ngata released a top seven this weekend that includes Clemson, his one-time leader. However, with the Tigers full at running back for now, the Clemson coaches are telling Ngata that anything can happen in recruiting.

The 4-star out of Folsom (CA) has Oregon, Texas A&M, Oklahoma State, Utah, Penn State and Arizona State also in his top schools. He is rated as high as the No. 2 all-purpose back by 247Sports and Rivals.

“I cut it to a top seven because I thought it was time to just focus on these schools and stuff,” Ngata told TigerNet Sunday. “It’s time to take that next step in the recruiting process.”

Ngata's brother Joe Ngata enrolled in January (he plays wide receiver) so Daniyel has made a couple stops on campus already. Ngata called Clemson his leader after his last visit but the Tigers have accepted two running back commitments since then in Demarkcus Bowman and Kobe Pryor.

However, co-offensive coordinators Jeff Scott and Tony Elliott have kept in contact with Ngata.

“Me, Coach Elliott and Coach Scott just text sometimes just to catch up and keep in contact,” he said. “They’ve got those two running backs committed but that doesn’t mean anything until Signing Day. I’m just keeping that contact with every coach.

“They said they’re still taking two but you just never know what’s going to happen. There’s not as much contact as there used to be, but we still keep in contact once every two weeks or every other week.”

“I’ll probably come out to an early game to see Joe but I haven’t figured out which one yet,” he said.

“I think I’m going to take an official visit to Texas A&M in a couple of weeks,” he said. “My summer is kind of busy because I’m trying to graduate early.”

Ngata is credited with over 1,700 all-purpose yards last season with 874 coming on the ground and 667 through the air with 22 total touchdowns.

God is my strong fortress; And he guideth the perfect in his way.
2 Samuel 22:33

Have a blessed day!