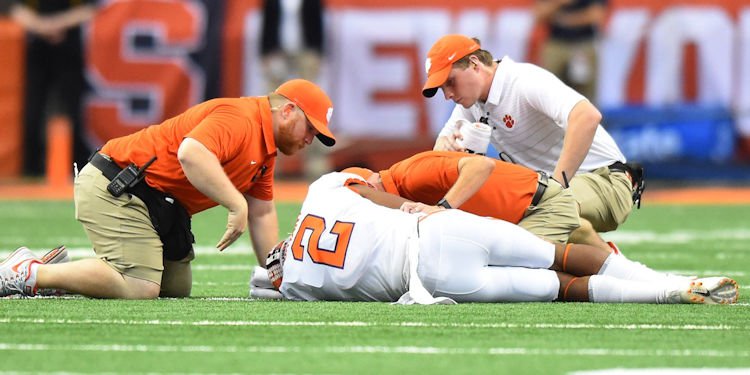 Bryant was knocked out cold and didn't return (Photo by Rich Barnes, USAT)

SYRACUSE, NY – Zerrick Cooper took snaps with both the first-team and second-team this week, and when the game was on the line it was Cooper who got the call and not Hunter Johnson.

Starter Kelly Bryant was limited with a sprained ankle and he left the game with a concussion late in the first half, and head coach Dabo Swinney said the decision to start Bryant and not Cooper or Johnson was his and his alone.

Swinney said he thought Bryant was close enough to 100 percent to play effectively.

“He was. He was ready to go,” Swinney said. “He kind of tweaked his ankle on one of the plays early and then he got a concussion. He got slammed into the ground is why he had to come out of the game. He put his heart into getting ready. I hate that he got hurt, but I'm glad that we've got an open date and hopefully we can get him healed up and ready to go.”

Swinney then said there was no question that Cooper would get the rest of Friday’s snaps, saying Cooper has been a solid second on the depth chart.

“Zerrick is the second guy. He's been the second guy,” Swinney said. “I actually thought Zerrick played pretty good. He did some good things, but we didn't help him in a couple of situations. We had a couple of missed assignments and evaluate and move forward.”

“Zerrick has been the second guy up since we named Kelly as the guy,” Elliott said. “That was the reaction after Kelly went out. He went in there and did a good job. In the flow of the game, he was managing the system so we kept him in there.”

Elliott then said that the staff knew Bryant would be limited in the run game.

“We were trying to move the pocket with him but you could tell that he wasn't quite himself,” Elliott said. “There were a couple of third downs that if Kelly's ankle isn't bothering him, he goes and gets those and we get into some shorter situations where we weren't able to convert. Anytime you have his ability to run, it definitely helps, but that's not going to be an excuse. Guys need to pick up the load and carry them.”

“We've got a lot of faith in Zerrick. I really don't think it had a lot to do with that. Anytime you lose, you're not looking for excuses,” Scott said. “It was a lot more than just Kelly being out of the game. We've got to do a better job as coaches giving those guys some better opportunities versus what they were doing. Give Syracuse credit, their guys executed better. I felt like we still had a good shot with Zerrick. There's a lot more there than Kelly not being with us.”

Scott said Cooper has separated himself from Johnson.

“I think he's been more consistent. We've had all spring and fall camp,” Scott said. “Hunter has done a really good job as well. He's closing the gap. I think from everything we've seen from January til now, Zerrick was a little bit ahead. I think he did some good things at times. Being thrown out there in that environment and in that situation, he'll have plenty of things he can clean up just like all of the guys.”

As for Bryant, Scott said the Tigers should have still been able to run the ball even without the threat of Bryant’s running ability.

“Obviously, we knew he was coming back from an injury so we wanted to be smart with him,” Scott said. “That still, I don't think was the difference in the game. We should be able to run the ball without having to run the quarterback every time. In the big scheme things, we don't look at that as being a big deal.”