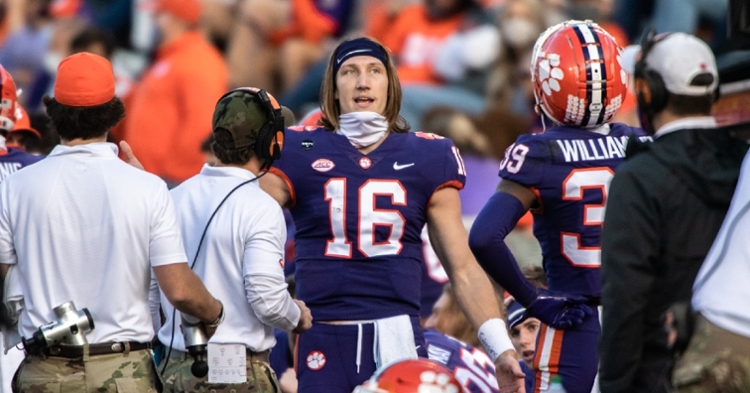 Lawrence threw for over 400 yards in what might be his last start in Death Valley. (Photo courtesy ACC)

CLEMSON – Clemson’s offense has been as dominant through nine games as any offense in Clemson history, and it’s all set up by the play of quarterback Trevor Lawrence.

Clemson joined 2013 Florida State as the only ACC team ever to score 34 or more points in each of the first nine games of a season, and the Tigers reached the 40-point mark for the seventh time in its last eight games with the 52-17 win over Pittsburgh Saturday. Clemson scored 31 points in the first quarter, tying the highest-scoring first quarter in Clemson history (SC State in 2016).

Clemson gained 581 total yards Saturday, its second-most this season. Clemson has now opened a season with 400 yards of offense in each of the first nine games of a season for the second time in school history (2018).

Offensive coordinator Tony Elliott gave the credit to Lawrence, who passed for 403 yards and two touchdowns.

"I told his parents afterward, I told his mom, Trevor has actually made me a better man,” Elliott said postgame. “The only person that has more scrutiny and attention on him in this program is coach Swinney. And the way that Trevor has handled it his entire career -- he hasn't played in five weeks and goes out there today and throws for 400 yards. There were times (Saturday) he wasn't protected the best but he's a warrior. We asked him to run the ball in critical situations and he did that. He's just an awesome young man. Just proud to be associated with him and have the opportunity to be around him because I truly mean it when I say he's made me a better person."

Wide receiver Cornell Powell had six receptions for 176 yards and a touchdown. The 176 yards is a career-high, breaking the 161 yards he registered in the loss at Notre Dame. Powell’s 176 receiving yards tied for the 10th-most in a game in Clemson history. Powell recorded his third consecutive 100-yard receiving game to tie a school record shared by Charlie Waters (1969), Tony Horne (1997), Rod Gardner (2000), DeAndre Hopkins (2012) and Sammy Watkins (2013).

"Every week, he continues to put in the work. I think it's been well-documented that it's never been a talent issue with Cornell,” Elliott said. “It's just a motivation and understanding issue. He got an opportunity and he really hasn't looked back. Coach (Swinney) really, really challenged him the week before BC, and he responded. That's three games in a row over 100 yards. The quarterback's confidence in him goes up, and the other wide receivers' confidence too.

"Our job as coaches, and him too, is for him to stay humble now. Not to get overconfident or complacent."

Elliott listed an early second-half fumble and pass protection as two of his concerns.

"Disappointed when we fumbled and gave up those seven points at the beginning of the second half. Definitely want to challenge the guys to protect the quarterback at all times,” he said. “We knew it was going to be a challenge today, they got two defensive ends that are top-6 on NFL boards. When you go back and watch film, it's probably not going to be as much them as it was a breakdown in our technique or trying to stay on a double-team too long, and those guys will make you pay for it. Felt like we could protect the quarterback better at times. But to go out and rush-- I mean that defensive structure held Notre Dame to 44 yards rushing.

"So I thought they did a good job of controlling the line of scrimmage. Outside of the three sacks, they did a really good job of battling in the trenches. We put some other guys in to spell some guys and prepare them without breaking down the cohesion and chemistry."

With Pitt selling out to stop the run, the Tigers threw the ball 16 times on 23 first-down plays.

"If they can get you behind the chains on second down, they can jump into their odd package and they have as good an odd package as anybody in the country,” Elliott said. “Very versatile and they can confuse the quarterback. So we wanted to make sure we stayed ahead of chains. After the first drive, being able to see OK, the offensive line can handle the guys up front and they're getting some good push, Travis (Etienne) looked like he was seeing it.

“This was a very specific game plan from a run standpoint, we had to all be on the same page because we knew there wasn't going to be a lot of error. We knew the backs were going to have to run through arm tackles and 7, 8-man boxes. But we needed to keep them honest. And if you're aggressive and you try to force the run, then over time it sets up some of the play-action. I thought our guys did a good job on the perimeter of extending the run game and taking advantage in the play-action."