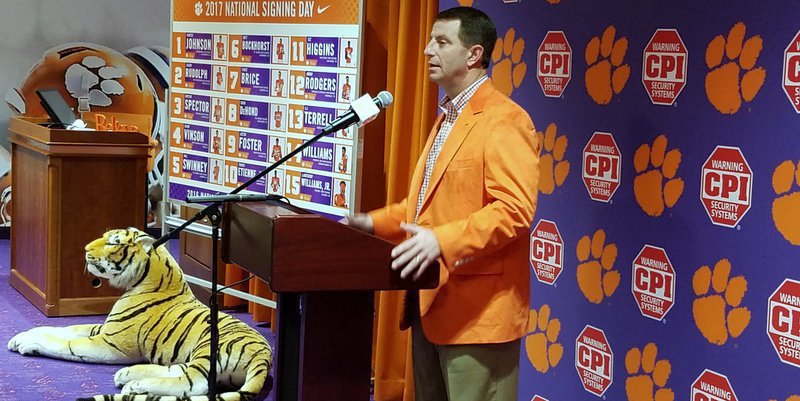 CLEMSON – Clemson head coach Dabo Swinney is a big fan of the early signing period, as he should be.

High school football players in the Class of 2018 were able to sign their National Letter of Intent months earlier than in the past. Instead of waiting until the 'traditional' National Signing Day - the first Wednesday in February – players had a three-day window from Dec. 20 to 22 to lock in their spots in the recruiting class.

This signing period has been reserved for junior college prospects in the past, but it is now open to high school players as well. Student-athletes don't have to sign early, but they can choose to do so instead of waiting until the calendar turns to the traditional signing day the first Wednesday of February.

In all, Clemson signed 15 players, including 10 who had 4- and 5-star ratings according to the 24/7 composite rankings.

"I love the early signing period, you can put me on record for that,” Swinney said this week. “I actually brought up an early signing period at the coaching convention three or four years ago. I wish it was in August, honestly. Kids don't have to deal with grown men trying to talk them out of a decision in January, and as coaches, we know what we need when to go on the road recruiting in January.”

Clemson’s class is currently ranked No. 10 by Rivals, No. 5 by ESPN and No. 7 by 247Sports composite, despite having only 15 signees.

Swinney said the added pressure of locking down a class in December hasn’t changed how he operates.

"Nothing has changed in my life these past three weeks because of the early signing period. Nothing. I'd still be on the road recruiting,” he said.

However, Swinney isn’t totally satisfied with the December date. If he had his way, the date would change to late summer.

"I wish it was in August. I actually think if it was in August it would slow the process down instead of speed it up,” he said. “That's because it would force coaches to think about who they're offering. Because the kids would want to sign in August if they're offered. What the heck is a non-committable offer? Don't offer the kid if you don't want him."