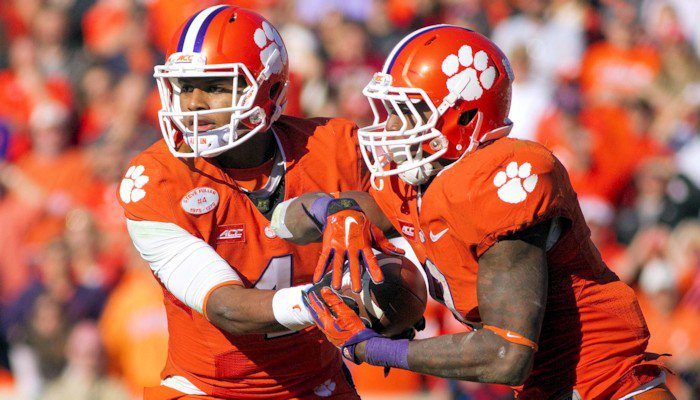 I get it. You go through this week thinking the opener would never get here, but the Tigers officially get the 2015 season underway Saturday afternoon in Death Valley. The weather forecast calls for warm temps, cloud cover and a chance of rain but not even a torrential downpour could dampen the fans’ enthusiasm.

The Tigers host Wofford for the first time since the 2011 season. Clemson is 29-0 against Football Championship Subdivisions since 1982, but in 2011 the Terriers led 24-21 in the second half before falling 35-27. That victory began an 8-0 start to the season, which was the last time Clemson won the Atlantic Coast Conference title. Wofford has finished in the top seven nationally in rushing for the past 17 seasons.

Wofford head coach Mike Ayers said it best earlier this week when he said Wofford would have to play really well and Clemson would have to have several things go wrong if the Terriers were to have a shot. That’s true, but the Terriers haven’t been afraid to play against the big boys in the past and 2011 is still fresh in everyone’s mind. The Terriers return a total of ten starters on offense and eight starters on defense, along with two specialists.

We still don’t know who the quarterback will be when the teams take the field Saturday. Evan Jacks was the starter in the first six games at quarterback and was 30-of-50 passing with three touchdowns and three interceptions, while Michael Weimer started the last five games and was 28-of-54 passing with two touchdowns.

Wofford will rely on tailback Lorenzo Long, who was first in rushing with 930 yards on 163 carries and 15 touchdowns a year ago. Ray Smith added 601 yards on 67 carries with three touchdowns, while Will Irwin was the leading receiver with 289 yards on 19 catches with two touchdowns. Wofford’s option game will be a stiff challenge for Clemson’s younger defenders, especially at defensive tackle and with defensive end Kevin Dodd

Kevin Dodd
RS Jr. Defensive End
#98 6-5, 268
Taylors, SC
View Full Profile making his first start. The ends will have to “set the edge” and force the quarterback to make quick decisions. If the Terriers can grind out first downs and control the clock, the Tigers could be in for another dogfight.

Mitch Hyatt
Fr. Offensive Line
#75 6-6, 285
Sugar Hill, GA
View Full Profile . If he does he will be the first true freshman to start the first game of the season at left tackle since 1944 when Phil Prince started the opener against Presbyterian. Since 1946, only one true freshman has started on the offensive line over the course of the season. That was Barry Richardson

Clemson is a perfect 29-0 against Football Championship Subdivision teams. The Division was formed prior to the 1978 season. Southern Conference schools became I-AA in 1982. Clemson has outscored Football Championship Sub-Division teams by a 1146-205 margin, an average victory of 39-7. Clemson has won 28 of the 29 games by at least double digits. The only exception came when Clemson defeated Wofford 35-27 in that 2011 game, and Wofford’s 27 points are the most by an FCS school against Clemson.

The Tigers also have the return of quarterback Deshaun Watson

Deshaun Watson
So. Quarterback
#4 6-2, 207
Gainesville, GA
View Full Profile . Watson played in eight games last year for the Tigers, five as a starter (4-1). The native of Gainesville, Ga. completed 93-137 passes for 1,466 yards and 14 touchdowns with just two interceptions. His 10.7 yards per attempt and 188.7 passing efficiency led the nation among players with at least 125 passes. His health will be a big concern this season but the returns during fall camp were encouraging. When Watson is on, the Tigers are hard to stop.

Wayne Gallman
RS So. Running Back
#9 6-1, 210
Loganville, GA
View Full Profile (769 yards last season) to help, and the running back rotation is bolstered by the return of Zac Brooks

C.J. Fuller
RS Fr. Running Back
#27 5-9, 211
Easley, SC
View Full Profile and the Tigers have plenty of options to run the football.

If that isn’t enough, Watson has several targets in Artavis Scott

Shaq Lawson
Jr. Defensive End
#90 6-3, 272
Central, SC
View Full Profile finally gets his chance to be a starter. He has been behind consensus All-American Vic Beasley

Vic Beasley
Defensive End (2010 - 2014)
#3 6-2, 236
Adairsville, GA
View Full Profile each of the last two years. Beasley was the No. 8 selection of the 2015 NFL draft by the Atlanta Falcons, and he started 12 of the games and played 557 snaps, while Lawson started just once and played 295 snaps. Despite the difference in playing time, Lawson actually had more tackles than Beasley (44-37). Lawson averaged a tackle for every 6.7 plays, while Beasley averaged one every 15.05 plays.

This Clemson team is a work in progress in many ways, and Saturday will be a chance for a lot of the fresh faces to work out the kinks. Don’t be shocked if Wofford hangs around longer than Clemson fans would feel comfortable seeing, but the truth is that the Terriers just won’t be a match for Watson and company. The Clemson defense might actually be better at defensive end versus the run, so the Terriers might have to focus on the inside run game. That will give young players like Christian Wilkins

Scott Pagano
RS So. Defensive Tackle
#56 6-3, 290
Honolulu, HI
View Full Profile an opportunity to show the coaches they deserve to play. Through the air? Wofford will hit big plays only if the defenders get too far out of position. The Tigers will have a nice lead at the half, stomp on the accelerator in the third and cruise to the win.