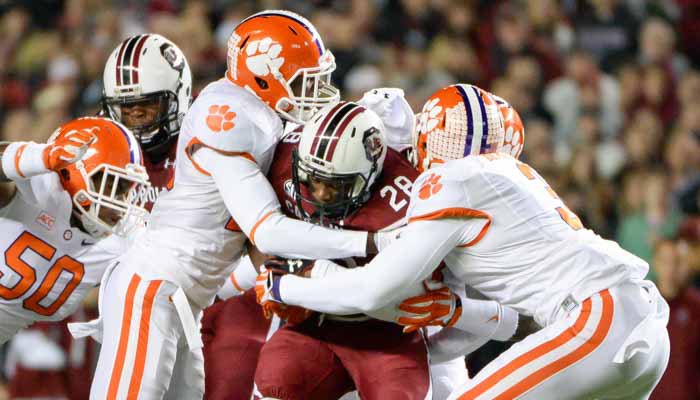 Visitors have scored only 7 TDs in Death Valley this season, and five came against UNC.

Saturday’s game between Clemson and South Carolina is about more than the rivalry itself. The Gamecocks have fashioned a five-game winning streak in the rivalry, and while that isn’t that big of deal when you consider the entire scope of the rivalry the five wins have come with the explosion of social media.

As a result, what used to be talk around the water cooler on Monday turned into trash talk on Facecbook, Twitter, Instagram and on the message boards of websites that cover the respective schools.

Clemson fans want the streak to end. South Carolina wants six in a row. What will happen in the 112th meeting between the two teams?

second in the SEC) and eight TDs. Cooper could be the wild card Saturday – he lines up in the wildcat and can throw or run the football out of that formation. When this group clicks, they are dangerous.

*All the pressure is on Clemson……….the Gamecocks aren’t playing for a lofty national ranking or a big bowl game. They’ve won five in a row in the series, and there is no pressure in losing one this season. With nothing to lose this group can come out and play loose and fast – like they did at Auburn a few weeks back – and go for it on every fourth down and run every trick play in the book. Clemson head coach Dabo Swinney

Dabo Swinney
Head Coach
View Full Profile made a big deal out of this game by installing countdown clocks in the meeting rooms – if the Tigers win he looks like a genius. But until the Tigers win it smacks of desperation.

*Throw out the record books? While there have been some upsets in this series, usually the team with the better record comes away with the victory. The team entering the game with the better overall record has a 19-9-1 record in the series since 1981. That computes to 67 percent over a 33-year period. Four times during that era both teams had the same record.

How about these numbers? Clemson’s defense at home is stingy – visitors have scored a grand total of seven touchdowns in Death Valley this season, and five came against North Carolina. The other two came against Louisville. That means four different teams – Syracuse, NC State, Georgia St. and SC State – all failed to score a touchdown against that defense. Those numbers are unreal.

*Clemson is the better team, and it’s time....Clemson coaches have felt like they had the better team each of the last two seasons and lost. They once again feel like they have the better team – maybe better program would be a better comparison – and have put a lot of focus into this game. I’ve heard through the grapevine that even the players have been “more engaged” than normal. The Tigers beat themselves with turnovers each of the past two seasons, and didn’t get a great effort out of their quarterback in either game. Can that trend be reversed?

I am not sure South Carolina can score at will on Clemson’s defense. The success they’ve had this season through the air is based on the success they have on the ground with Davis and Brandon Wilds. Once teams start peeking into the backfield Cooper or Byrd get loose behind the secondary. Clemson won’t let South Carolina run at will – nobody has really run the ball against Clemson since the opener at Georgia, and South Carolina’s running attack isn’t nearly as stout as the Bulldogs. That means the Gamecocks will have to throw to score points, and that means Clemson can turn Vic Beasley

Corey Crawford
Sr. Defensive End
#93 6-5, 276
Columbus, GA
View Full Profile and company loose. The Gamecocks will score points – they’re too talented to keep off the board – but points will be at a premium.

For Clemson, the big question has been whether freshman quarterback Deshaun Watson

Deshaun Watson
Fr. Quarterback
#4 6-3, 204
Gainesville, GA
View Full Profile will play. He will play. How much and for how long? That remains to be seen, but whether it’s Watson or Cole Stoudt

Cole Stoudt
Sr. Quarterback
#18 6-4, 231
Dublin, OH
View Full Profile at quarterback Clemson’s game plan needs to be to run the football. South Carolina’s run defense is pitiful – they’ve given up 213 yards per game on the ground this season, and opponents are averaging 5.41 yards per carry. That’s atrocious. Even if Watson is healthy, the Tigers need to let Tyhson Dye and Wayne Gallman

Chad Morris
Offensive Coordinator / QBs
View Full Profile needs to stick to the game plan – no trick plays – and not get desperate if things aren’t working early. The game film says the teams that have beaten South Carolina have stuck with the run game and won games late.

So how does this one shake out? Clemson’s defense plays really well, and Watson helps Clemson’s offense score early. But I’m not convinced Watson can go the whole game, and that doesn’t bode well for Clemson scoring points. I’m a big fan of history, and unfortunately history tells me that Clemson will get out-coached – at least offensively – and will commit a turnover or two that will give the Gamecocks life. Can Clemson survive? With this defense, yes.