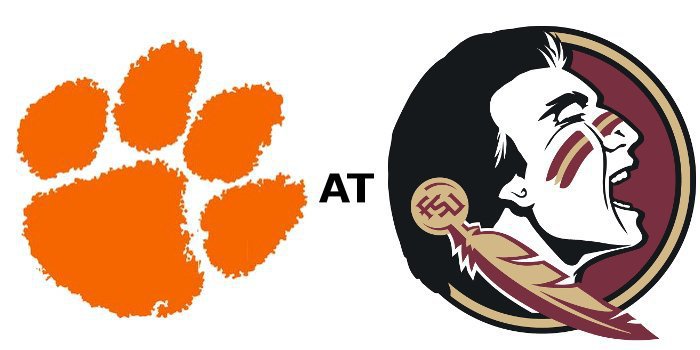 Clemson and FSU kick off at 8:22 pm Saturday

The annual contest that pits Clemson vs. Florida St. is usually played with an ACC Atlantic Division championship on the line. That isn’t the case this season, but this one still matters. It matters a lot.

Third-ranked Clemson sits at 7-0 and all of the season goals are still on the table. Florida St. sits at 5-2, and the chance to play in the ACC Championship Game was lost the day the Seminoles lost to North Carolina in Doak Campbell on the last play of the game.

However, Clemson’s win over Louisville doesn’t seem to matter to many across the college football landscape, and the Tigers need to win on the road in a stadium where they haven’t won since 2006 to add some positive momentum.

Clemson can lose this game and still play for and win the ACC Championship and would still likely earn a spot in the College Football Playoff. But that isn’t a given. Not by a long shot. Clemson needs to win this game. This game still matters.

*Clemson has won just once in Tallahassee since the Seminoles joined the ACC for the 1992 season. That came in 2006 when the Tigers were victorious 27-20 on a one-yard run by James Davis with just eight seconds left.

Florida State's defense this season ranks 119 out of 128 teams in yards per completion allowed giving up an avg. of 14.59 yards. They are also without top safety Derwin James. In its last two games, FSU limited Miami and Wake Forest to 62 and 68 rushing yards, respectively, after allowing an average of 191.2 rushing yards in its first five games, and a lot of that has to do with the return to health of DT Derrick Nnadi.

The Seminole defense has indeed played better over the last few weeks, but neither Miami or Wake Forest are offensive juggernauts (64th and 119th in total offense). Clemson has the ability to put points on the board, but the Tigers have struggled with drops (26, which matches the total from last season) and turnovers (four against NC State, including a pick-six.). This game will be won or lost with how Clemson protects the football…they can get away with one or two turnovers, but any more than that and this one could turn in FSU’s favor. The Noles already have the home field advantage, and turnovers will add to the frenzy.

I don’t know if Clemson will be able to run successfully on Florida St. – I’m just not sure the offensive line can push the Noles around. That means more of what we’ve seen this season – quick passes to the outside and having to work the way down the field. This takes away a lot of the big plays, but FSU will have trouble covering the likes of Jordan Leggett in the middle of the field and it could be another big day for Artavis Scott if the Noles concentrate on Mike Williams. The Tigers have the edge here. ADVANTAGE: CLEMSON

Let’s just go ahead and get this out of the way. Dalvin Cook is a great running back. To me, he’s the second-best back in college football behind Leonard Fournette, and he will get his yards against the Tigers Saturday. Cook stands seventh nationally in rushing, and needs exactly 100 yards to reach 1000 yards on the season.

The ‘Noles will likely be without wide receiver Bobo Wilson, but quarterback Deondre Francois still has a bevy of playmakers to throw the ball to. Francois’ stats are very similar to Watson’s this season – especially in yards per game and completion percentage – but he has just 10 touchdown passes compared to 20 for Watson.

The key for Clemson – and FSU – will be Francois. Can the Seminoles protect their young signal caller? Can Clemson affect his rhythm and hit him and sack him enough to cause issues? Clemson needs to disrupt the freshman early – the Seminoles have had trouble scoring early in games, and Clemson needs to get off to a good start. FSU’s offensive line has been, well, porous. The Seminoles rank 108th nationally in sacks allowed, with 21. Clemson has Austin Bryant back healthy, and the rest of the defensive line is gaining experience each week. If the Tigers can contain Cook enough – just not let him run wild – they have the advantage. ADVANTAGE: CLEMSON

Both teams are good at suppressing the opponent’s return game. Both teams have dangerous punt returners. Both teams are middle of the pack in kickoff returns. Florida St.’s Logan Tyler has helped the Noles with his 42.33 yards per punt average, while Clemson’s Andy Teasdall and the Tigers sit 113th nationally in punt average, with Teasdall averaging 38.39 yards per punt. Clemson’s Greg Huegel is 8-of-10 on field goal attempts and has 21 touchbacks in 41 attempts, while Tyler has 33 touchbacks in 50 attempts for the Noles. Another Aguayo, this one named Ricky, is kicking at Florida St. and he’s hit 14-of-19 attempts. Aguayo was 6-6 against Ole Miss in the opener, but missed all three of his attempts in the loss to UNC. Other than UNC, however, he’s been solid. ADVANTAGE: FLORIDA ST.

This one comes to down to a couple of keys for me – can Clemson keep from turning the ball over and dropping passes, and can they affect Francois enough to halt FSU drives. I don’t know that either team will hit a lot of big plays, so taking care of the football and extending possessions will be critical for both teams. The FSU crowd will be in this one early, and Jimbo Fisher has had two weeks to prepare a solid gameplan. That will keep Florida St. in the game early, as long as they don’t have one of those patented slow starts. If they do that, they could be down by a wide margin early. The guess here is they won’t, and Clemson will have to use its playmakers to pull away late.

This Clemson team, for whatever reason, seems to play better on the road. They also have the best player on the field in Watson.