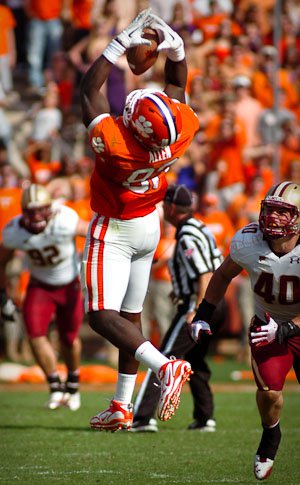 Allen has 65 receptions in his Clemson career, one more than Bennie Cunningham had for the Tigers between 1973-75.

*Clemson is now 55-0-1 in its history when gaining at least 500 yards of total offense.

* With the win today, Tajh Boyd

* Boyd entered today’s game leading the nation in third-down completions for a first down with 27. He added two more in today’s game giving him 29 for the season.

*Boyd threw his 15th touchdown pass of the season today. In just six games, that is already the sixth most touchdown passes in a season by a Clemson quarterback. The record is 27 by Cullen Harper in 13 games in 2007.

* Boyd scored the fourth rushing touchdown of his career on a career-long-tying 14-yard run in the first quarter. Boyd finished the game completing 16 of 26 passes for 283 yards and one touchdown. He also rushed six times for 37 yards giving him 320 yards of total offense in today’s game. He has had three 300-yard total offense games this year and six straight games of at least 200 yards passing.

Andre Ellington
RS Jr. Running Back
#23 5-10, 190
Moncks Corner, SC
View Full Profile rushed 22 times for 117 yards and a touchdown in today’s game. That is Ellington’s second 100-yard rushing game this season and the sixth of his career.

Cole Stoudt
Fr. Quarterback
#8 6-4, 200
Dublin, OH
View Full Profile finished the game 6-10 passing for 37 yards after Boyd went down with an injury. It was his first appearance since the season opener against Troy.

Chandler Catanzaro
RS So. Punter / Kicker
#39 6-2, 200
Greenville, SC
View Full Profile made a career-high five field goals in five attempts in today’s game earning him the Leather Helmet award in a vote by the media.. It is the first time since 2009 that a Clemson kicker has made at least four field goals in a game. Ironically, the last time too place when Clemson played Boston College at Memorial Stadium in 2009. Richard Jackson

Richard Jackson
Punter / Kicker
#19 6-0, 195
Greer, SC
View Full Profile went 6-6 against the Eagles to lead Clemson to a 25-7 victory. Jackson won the Leather Helmet Award that day. Clemson kickers have now made 11-11 field goals against the Eagles in Death Valley over the last two games.

* Catanzaro also made a 42-yard field goal in the second quarter and 47-yard in the third quarter making him 5-6 on field goals of at least 40 yards this season. He is also now 11-15 from 40+ yards in his career.

Sammy Watkins
Fr. Wide Receiver
#7 6-1, 200
Fort Myers, FL
View Full Profile caught seven passes for 152 yards in today’s game. Watkins now has 38 receptions on the season and has at least seven receptions in four of the six games this season. Watkins has 623 receiving yards in six games. He is just 61 yards off the Clemson freshman receiving yardage record of 684 by Derrick Hamilton in 2001.

*Watkins now has three receiving games of at least 140 yards this season. He is now in second place in Clemson history in terms of CAREER 140-yard receiving games.Yes, just six games into his career. Perry Tuttle had four in his career between 1978-81. Watkins is second with three, 152 today, 155 against Auburn and 141 against Florida State.

Dwayne Allen
RS Jr. Tight End
#83 6-3, 255
Fayetteville, NC
View Full Profile had four receptions for 49 yards in today’s game. He has now had at least four catches in each of the last four games. Today also gave him 65 receptions in his Clemson career, one more than Bennie Cunningham had for the Tigers between 1973-75.

Kourtnei Brown
Gr. Defensive End
#90 6-6, 255
Charlotte, NC
View Full Profile all recorded sacks for Clemson today. Goodman also recorded three tackles for loss and forced a fumble in today’s game. It was a career high in terms of tackles for loss for Goodman.