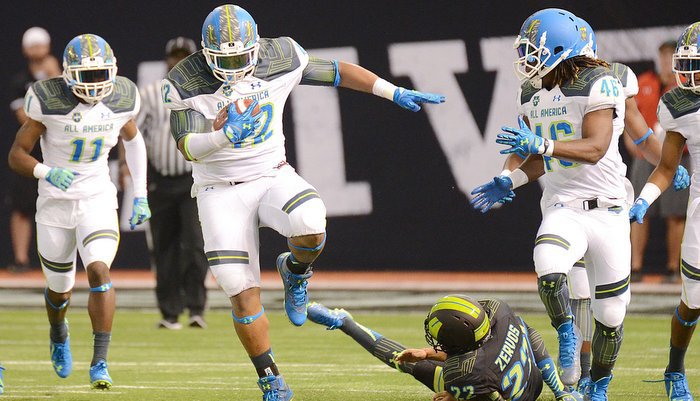 Clemson football was all over the airwaves this past weekend as several 2015 commitments made their mark in all-star showcases in San Antonio and Tampa.

Cain threw a 54-yard score to Lawrence Cager on a reverse-pass for the East team. Cain later showed his speed and caught a 50-yard touchdown pass from Drew Lock. His touchdown came on a post route in the fourth quarter, and Cain easily beat the defender into the middle part of the field and outraced the defense into the endzone.

The East team fell into an early hole, but Cain’s heroics helped the East make a strong comeback before falling 39-36 to the West.

Cain, who played quarterback in high school and drew a few offers to play that position on the collegiate level, was recruited to Clemson as a wide receiver. New offensive coordinators Tony Elliott

Jeff Scott
Asst. Coach (WR) / Recruiting Coord.
View Full Profile also have to see Cain’s potential in the Wildcat – his touchdown pass was a thing of beauty and he showed off a strong arm.

Huggins wound up with two tackles, while Smith suffered a calf injury early and missed the majority of the contest. However, before the injury he was able to make a few impact plays at linebacker and on special teams. On a kickoff in the first quarter, he pinned the West squad deep when he stuck the return man inside the 10-yard line. He wound up with two tackles.

Tampa native Ray-Ray McCloud had a 38-yard run on a double reverse to set up a field goal for the Highlight squad. The five-star athlete also played on special teams as a returner.

Another intriguing prospect in that game was 4-star defensive tackle Christian Wilkins, an elite prospect who is the top-ranked player in the state of Connecticut and the 8th-rated defensive tackle in the country. Wilkins has the Tigers in his final group, and he had four tackles, two tackles for loss, a sack, and a blocked PAT that he returned for a touchdown.