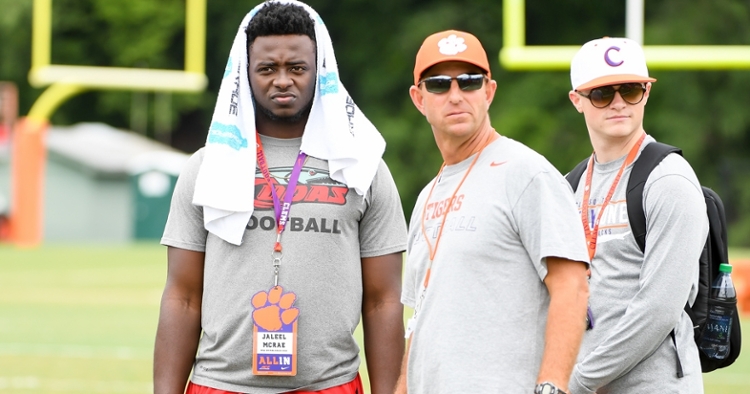 College football recruiting is difficult and tricky even under the best of circumstances. Add in the restrictions put in place by the NCAA as the nation comes to grips with COVID-19 and it makes the difficult almost impossible. Almost.

Effective September 16, the NCAA suspended all in-person recruiting for D1 sports and extended that through January 1. Coaches are not allowed to meet face-to-face with a recruit off-campus or do any in-person scouting.

The NCAA has also encouraged all colleges to stop all official and unofficial visits. Recruiting hasn’t stopped completely; coaches and recruits can still communicate over email, phone, text, and social media. Several Clemson prospects have attended Clemson games this season by paying for their own travel and buying their own tickets, a far cry from a usual recruiting weekend during the fall.

Clemson has 17 commitments in the 2021 recruiting class, which is ranked as the sixth-best class in the country right now according to the 247Sports Composite. Much of that success is due to the fact that Clemson fills its class early in the process.

The 2022 class, however, has been affected by the lack of head coach Dabo Swinney’s high school camp this past June, the All In Cookout, and the lack of in-person scouting by the coaches at high school games around the country.

“Fortunately for us, over the past few years, the way recruiting has ramped up, we’ve been pretty fortunate that we’ve been able to really commit most of our class before we’ve really gotten into the season, outside of maybe a spot or two,” Swinney said Tuesday. “So, I think the biggest challenge has been, in the past we would have had a lot of juniors on campus throughout the season, and we would have been able to go out and see them in person. So, I think that’s the biggest thing.”

Swinney then said that the Clemson coaches have slowed down the process and are making the best of a bad situation.

“I’ve always been trying to get it to slow down, and that’s kind of where I am,” Swinney said. “And I think in a weird way, it will slow it down to where you’re actually going to be evaluating seniors a little bit more going into next year as opposed to the kind of the way it’s been the last couple years where you pretty much have moved on to the junior class by the time you get into fall. The seniors pretty much, for us, have been done. But I hate it because there’s a lot of schools out there that are still recruiting seniors heavily, and not being able to get guys on campus and things like that is a challenge. But we’ve made the best of it.”

Like the rest of the country, Swinney and the Clemson coaches and recruiting staff are spending a lot of time on Zoom calls. And while that hasn’t impacted the 2021 recruiting class, it has led to challenges for the 2022 class.

“We’ve done everything that they allow us to do,” Swinney said. “We’ve spent a lot of time communicating virtually – Zoom, FaceTime, all that stuff. So, obviously, you’re watching the tape, you just don’t get the personal part. It’s a little unique that you may have somebody coming to play for you that’s actually never been to campus. We have the potential for that to happen in this class.

“We’re in a good place for this class of ’21, but for ’22, compared to where we would normally be at this point… I’m not saying we’re behind, but it’s slowed down, and I don’t necessarily think that’s a bad thing,” Swinney said. “Certainly the process is slower now than it was, and we typically don’t offer a lot of guys anyway. So, just gives us a little more time to evaluate tape, and again, a little more get-to-know-each-other before they get on campus.”

Swinney said he is hopeful that the turn of the calendar will lead to recruiting getting back to some semblance of normalcy.

“Hopefully this spring, things will get back to some normalcy,” Swinney said, “and we can get back out on the road and young people can get to the campuses and kind of add that piece to it.”