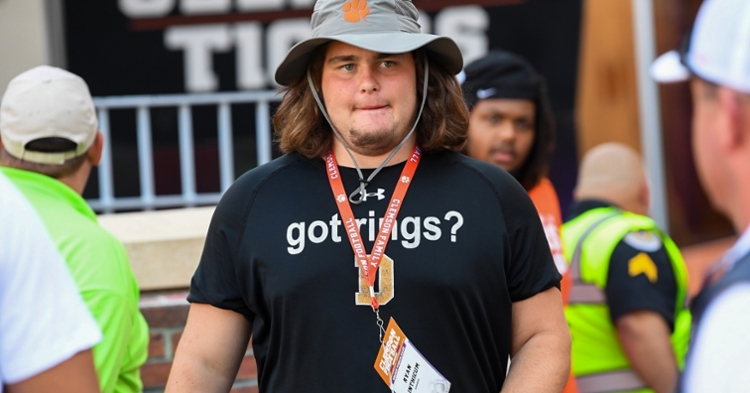 Linthicum is one of the top prospects in the country and he's All In.

As Clemson continues to add to an already loaded 2021 class, one of the most important positions on the field has been filled by one of the top prospects in the country.

Ryan Linthicum decided early on in the recruiting process that Clemson was the only place he could see himself playing college football. The 6-4, 275-pound center from Damascus (MD) committed to the Tigers in September 2019, giving the Tigers a solid piece to build the offensive line around.

TigerNet caught up with Linthicum to discuss his recruitment, his off-season training, and which players he would like to see join him at Clemson.

“When I came on my second or third visit to Clemson, it about sealed the deal for me,” Linthicum told TigerNet. “The coaching staff is very down to earth and I couldn’t see myself being coached or playing for anyone else. What makes Clemson so special is how much of a home feel it is and the coaches are the best coaches in college football.”

“Talking to Coach Caldwell is special,” he said. “He’s always checking in on me and seeing how my family and I are doing, and we talk about the playbook together.”

The center is a critical piece in any offense, responsible for calling protections and making sure the offensive line is on the same page. Linthicum is one of the best centers in the country in his class, and Clemson liked a lot about Linthicum’s game.

“They really like my quick feet, and also that I’m a true center,” he said. “Another thing that stood out to them is that I am a 3-sport athlete and play lacrosse to help my athleticism and footwork. And they love my nastiness as an offensive lineman.”

As a high school teammate of Clemson defensive lineman Bryan Breese, Linthicum got a chance to hear a player’s perspective on what Clemson offers.

“He definitely said Clemson was the place to be,” Linthicum said. “With that being said, he never pressured me to do anything. He just wanted the best for me and gave me great advice during the recruiting process.”

Linthicum continues to be one of the Tigers' best recruiters, talking to prospects about joining him in Clemson and being a part of something special.

“The 2021 class will be legendary,” he said. “We have something cooking up. I’m working on Tristan Leigh and it’s looking good. Same with Troy (Stellato).”

Linthicum continues to train hard to prepare for his senior season of high school football. Linthicum is training five days a week, maxing out at 370 pounds on bench press and 540 pounds on squat. Linthicum’s high school film shows how explosive he is at the snap, playing fast and driving opponents downfield on contact. His athleticism is constantly on display in his film, showing off his quick feet and getting to the second level on plays regularly.