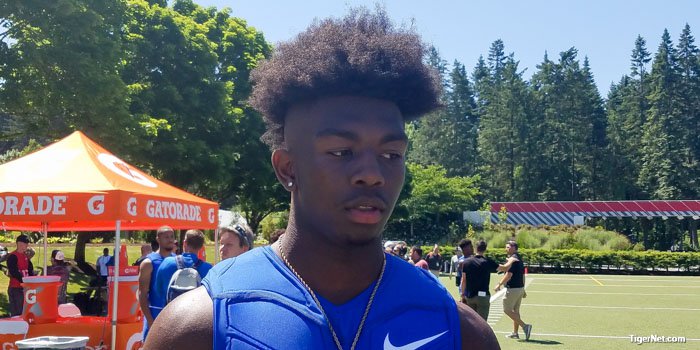 Ross has a final three of Alabama, Auburn and Clemson

With just three weeks to go until National Signing Day, Justyn Ross’ schedule is slam packed and he has a lot to consider before making his final decision.

The 5-star Phenix City (AL) Central WR and the No. 72 rated player in the ESPN 300 took his official visit to Clemson last November for The Citadel game and will take official visits to Alabama on this weekend (Jan. 19) and Auburn next weekend (Jan. 26).

While Clemson has already used its one and only official visit, defensive line coach Todd Bates and co-offensive coordinator and wide receiver coach Jeff Scott were the first school in to see Ross after the dead period ended last week.

"It was straight, just like any other visit. I was sick so they didn't stay too long, so we didn't get that much done," Ross said of the visit. "They were just telling me about how I can come and compete for a position knowing that Deon Cain just left for the draft. That's the position he's going to put me at so they were telling me about that. It sounds good to me."

Of course, one of the biggest topics of conversation was how Scott would use Ross – who is 6-4 and 200-plus pounds – in Clemson’s offense, especially considering that Deon Cain and Ray-Ray McCloud made the early jump to the NFL, announcing their intent last week.

With all of his family in Alabama, the lure stay in the Yellowhammer State is strong, but so is the chance to play for Wide Receiver U, making Ross’ decision that much harder.

"I still would like to play for my state, but I don't know for sure," Ross said. "It's really a tie down the stretch right now between Alabama, Auburn and Clemson. It’s going to be hard."