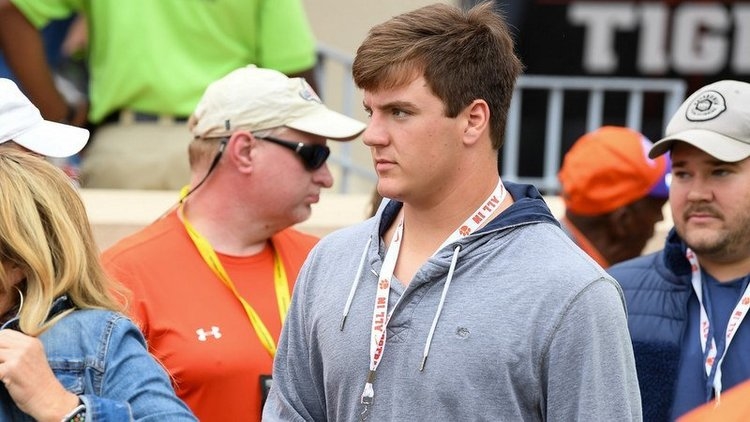 Trotter was given a scholarship at the spring game

What once was a childhood dream team becomes an in-state rival for 2019 commit Mason Trotter.

Trotter, an offensive guard out of Roebuck (SC) Dorman, grew up a South Carolina fan, but roles have changed after his recent commitment to Clemson.

Trotter committed to Clemson on February 6th, 2019, after accepting a gray shirt offer from the Tigers. Trotter racked up offers from other ACC schools including Louisville and Syracuse, but in the end, the Tigers won the battle.

TigerNet is reaching out to the remainder of the 2019 recruiting class for a final interview before they arrive in June, and has a special Q&A with each player. Here is what Trotter had to say.

What has life been like since February when you signed on?

A: It’s been pretty relaxing knowing that I finally got in, and knowing that I get to go in now. I’ve just been working out and trying to get ready as best I can before I report there.

Q: What have you done since realizing this is your last little bit of high school?

A: I really have been trying to hang out with my friends more. I know a lot of them are going to different places, like playing football in different places. So, I really just try to spend time with them and with my family more. I’m not going to be able to see them every day like I do now.

Q: What have you done both mentally and physically to prepare for Clemson?

A: One of the main things I’ve been doing is running a lot more, getting in shape and condition. My coaches and former players say that’s the biggest transition. Making sure you’re in shape; it’s a lot different from like high school. You have to make sure you’re good to go.

Q: When do you move in, and do you know who your roommate will be?

A: I move in June 23rd, and I’m rooming with Mac Cranford.

Q: What number will you wear?

A: I don’t really know. I’ve just always worn in throughout my whole high school career. It’s just a random number, I guess.

Q: What have the coaches been telling you, mainly Coach Caldwell?

A: Just really make sure I’m conditioned. That’s the key point. And to make sure I’m having fun right now and enjoy the little bit of time I have left.

Q: With some of the guys potentially leaving like Shaq and Tavion, have they mentioned a scholarship at all or is the plan still to gray shirt?

A: I’ve already been put on a scholarship. They told my parents when we went to the spring game that I was on a full scholarship and didn’t have to worry about anything.

Q: What are most looking forward to when you get to Clemson?

A: Probably just the atmosphere that’s there. I just know so many people there, it’s just going to feel like home. And the games, winning.

Q: Is there one game on the schedule that you can’t wait for?

A: I don’t think so, probably the South Carolina game. That’s going to be the most exciting one in the regular season. I grew up a South Carolina fan so knowing that we are playing against them as I am going to Clemson is cool.

Q: What do you think it will be like running down the hill?

A: Probably really exciting, especially the first time. It’s going to be electric.