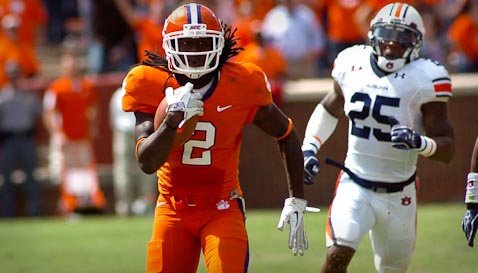 • Atlantic Coast Conference Champions for the first time in 20 years.

• Atlantic Division Champions of the ACC for second time in three years.

• Gained seven wins over ACC teams for the first time in 28 years.

• Defeated four top 25 teams, tied for third in the nation, and most in Clemson history for one season. Just third ACC school to have four top 25 wins in same year since 2000.

• Overcame a deficit of 14 points or more to win three games, most in one season in school history. Clemson had done it just nine times in 115 years previously. Overcame 18-point deficit at Maryland to tie for second greatest comeback in Clemson history.

• Won first eight games of the season, just the fourth team in Clemson history to do that, the first in 11 years.

• Defeated 10th ranked Virginia Tech 23-3 on October 1 and the 20-point margin was the largest in Clemson history in a road win over a top 25 team.

• Became bowl eligible on October 7, the earliest bowl eligibility on the calendar in Clemson history.

• Set school record for consecutive quarters scoring with 22 in a row between September 17 and October 22.

• Achieved all this with a roster that played 29 freshmen (true or red-shirt), tied for the most in the nation with Indiana.

• Set Clemson record for kick scoring in a season with 118 points on 22 field goals and 52 extra points.

• Ranked 14th in nation in field goals per game.

• One of six finalists for the Dave Rimington Award, the award presented to top center in college football.

• ACC Freshman of the Year

• National Freshman of the Year by Sporting News and Rivals.com

• Finalist for Bear Bryant Coach of the Year

• Finalist for Eddie Robinson Coach of the Year

• Regional Coach of the Year by AFCA

• Finalist for Liberty Mutual Coach of the Year

• National Coordinator of the Year by Rivals.com

• National Offensive Coordinator of the Week for Auburn game by Rivals.com

• National Defensive Coordinator of the Week for Virginia Tech game by Rivals.com