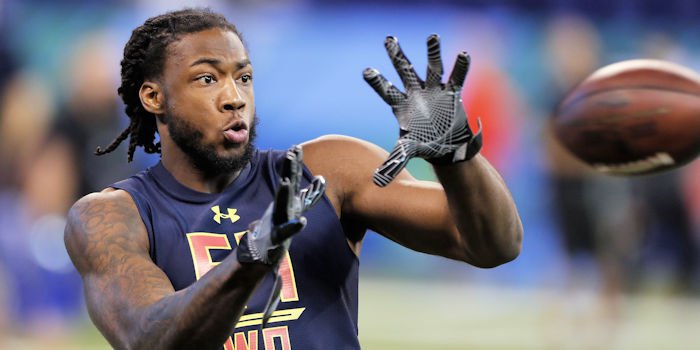 Clemson, S.C.—As many as nine former Clemson players could be selected in the NFL draft this weekend according to those who evaluate college talent for a living. The annual draft of college players will be held April 27-29 in Philadelphia, Pa. The first round will be held Thursday night beginning at 8 p.m. with the second and third rounds to following Friday evening, and the final four rounds on Saturday afternoon. ESPN and the NFL Network will provide live coverage.

Clemson wide receiver Mike Williams and quarterback Deshaun Watson are listed as strong candidates to be selected in the first round on Thursday night. If so it would be the second time in three years, but just the fourth time in history that Clemson had a pair of first-round selections.

Draft predictions have Watson going as high as No. 3 to the Chicago Bears (Draftwire.com), while Williams’s high prediction is No. 5 to the Tennessee Titans (Bleacher Report, Charley Casserly, NFL Network). A look to 17 different mock drafts shows Williams going in the first round within the top 20 selections in all 17, while Watson is a first round choice in 16 of the 17.

Other Tigers who helped the program to the 2016 National Championship who could be drafted include Jordan Leggett, Carlos Watkins, Cordrea Tankersley, Wayne Gallman, Artavis Scott, Jadar Johnson and Ben Boulware. All are rated in Todd McShay’s top 300 players.

Clemson has had a strong draft history in recent years under Head Coach Dabo Swinney. The Tigers had nine selections last year, second most in the nation to Ohio State’s 12, and it was the second most in one draft in Clemson history. Only the 1983 draft had more Tigers taken with 10. The program has had at least four players chosen in eight straight years, the first ACC program to do that since Florida State had a 10-year run from 1992-01.

Swinney has six first-round selections in his eight drafts as head coach. The Tigers have had 42 players drafted since Swinney became head coach, sixth in the nation.

*The ACC had 26 players selected overall in 2016 and Clemson had nine of those selections. No other league school had more than three.

•With the selection of Shaq Lawson and Kevin Dodd in 2016, Clemson has had seven defensive ends selected in the last seven years.

*With the selection of MacKensie Alexander, T.J. Green and Jayron Kearse in 2016, Clemson has had 11 defensive backs selected in the last eight years. Cordrea Tankersley and Jadar Johnson could increase that total this year.

•Entering the 2017 draft, Clemson is third among ACC schools in first round selections (27) and total draft choices (237).