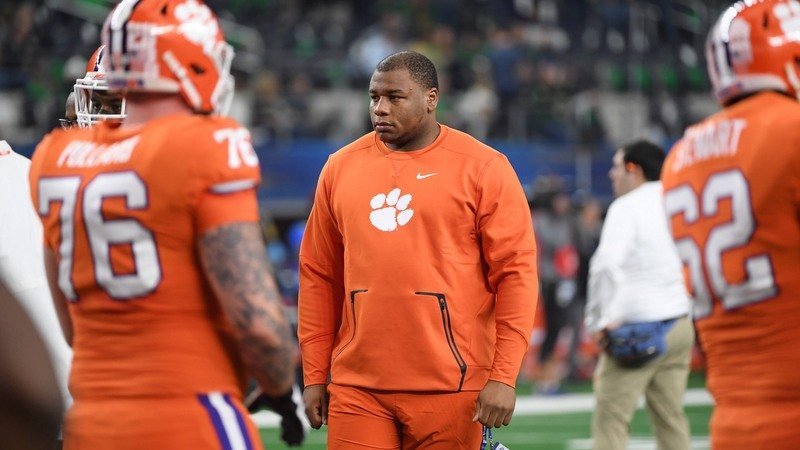 Dexter Lawrence on the sidelines before Clemson's Cotton Bowl win

ARLINGTON, TX – Dabo Swinney didn’t want to ruin Brent Venables’ Christmas, so he didn’t tell Venables about the Dexter Lawrence suspension until the Tigers got on the plane to Dallas last Sunday. None of that mattered.

Clemson defeated Notre Dame 30-3 in the Cotton Bowl and loss of Lawrence – suspended for two others after traces of a banned substance showed up in a urine sample – didn’t matter.

“No, we had six sacks, which I believe is a bowl record. And we held them to 88 yards rushing. So the big thing for us was, if you can't stop the run, you ain't winning these games,” Swinney said. “It's just that simple. The first play, actually, was a little cutback on us. But we really settled in, and we played well. I thought Albert Huggins did a great job. We have got good depth. We went into it. We didn't change anything.”

Swinney kept the suspension a secret as long as he could.

“I didn't even tell Brent. Brent had no idea that we weren't going to have Dexter until Sunday. When we got on the plane, I told him,” Swinney said. “I didn't want to ruin anybody's Christmas. I found out Thursday. And I didn't tell anybody until Sunday because I knew what I was dealing with Thursday, Friday, Saturday. I didn't want to put that on my staff. I wanted them to just enjoy their time with their families and have a couple days off there.”

Huggins, Nyles Pinckney, and Jordan Williams filled in for Lawrence and the Tigers didn’t miss a beat.

“Nobody flinched. We're confident in Albert, confident in Nyles [Pinckney], confident in Jordan [Williams]. And Dexter did a great job of putting on a coaching hat and being a great teammate,” Swinney said. “We pressured the quarterback. We didn't do a good job early. He's a slippery guy, man. We took some of the easy stuff away. Their really quick passing game, short passing game, a lot of screens, everything is built off the run. And we took that stuff away and made him hold the ball.

“But he still popped some on us. Up the middle, we didn't do a good job. But we finally kind of settled in, choked our rush down a little bit, and were able to contain him and get some pressure on him.”

The final dagger was a Nolan Turner interception that effectively ended any Irish hopes.

“The interception in the second half was a big play for us. They had good field position right there. And Nolan Turner's play was huge. Brent [Venables] and our staff, they do an amazing job,” Swinney said. “And our secondary. Everybody -- our secondary has been reading for three weeks how terrible they are. I mean, Good Lord, we have one sub-par game that you win by three touchdowns and all of a sudden our secondary is terrible. I thought they were ready, played well. They took ownership of the plan. We lined up properly, corrected some of the mistakes that we had earlier in the year.”