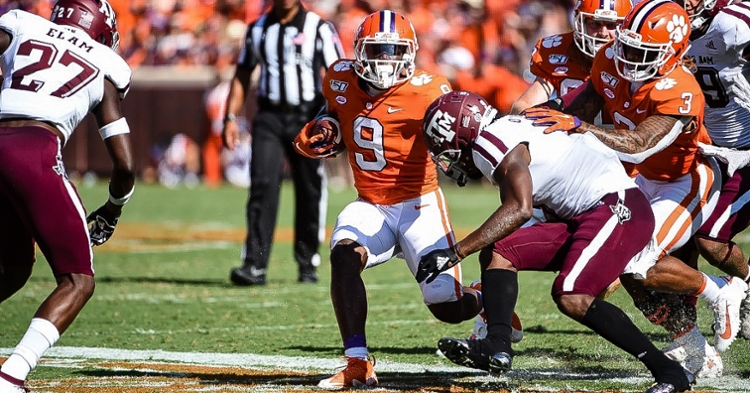 Travis Etienne has faced a lot of eight-man fronts this season.

Quarterback Trevor Lawrence and running back Travis Etienne were listed on multiple watch lists for the Heisman Trophy to start the season, but through the season’s first four games neither player has put up the eye-popping stats of other players around the country.

Part of the reason? The Clemson coaching staff builds the team for the postseason and that means playing a lot of players across the board. Less individual stats to be sure, but co-offensive coordinator Tony Elliott says the coaches can’t worry about things they don’t control.

“We don't worry about it. Those decisions are made outside of our building and outside of our control. We just focus on being the best version of ourself and playing our best football,” Elliott told TigerNet. “And we've always talked not having an ego about what we do offensively. Each team is going to have a plan on how they want to defend us and we just have to take what is there. I'll speak to Travis' situation - he has faced a lot of 8-man boxes.

“A lot of people have said they aren't going to let him run the football. But he is still playing hard and playing at a high level. And if he continues to do that, at the end of the season he will look up and get what he's earned. That is all we worry about. We don't worry about or focus on any of the awards. At the end of the day, this is a team sport and it's the ultimate team sport. All we focus on is how the guys play and we let everybody else decide all of that other stuff.”

Co-offensive coordinator Jeff Scott said that wide receiver Tee Higgins was more than willing to let his playing time go to younger players in the win over Charlotte last week.

“They’ve been a part of championship teams, these championship runs that you want to make. They know it’s a long year, and so this is an advantage – they can go in there and play well, and then be able to get on the sidelines and kind of rest up, let the other guys play.”

Elliott said the goal is to build competitive depth so the Tigers can play for championships in December and January, not individual trophies.

“There are a couple of pictures, if you go look, at the end of the Syracuse when Chez (Mellusi) gets in there and breaks a long run,” Elliott said. “Travis is one of the first guys to congratulate him when he comes off the field. Same thing with Mikey Dukes when he scored this week. These guys understand that they were in that position at one time and they appreciate that the older guys wanted them to get an opportunity to play. And they understand, too, that we have to have depth. And the only way that we build competitive depth is if we get those guys experience.

“They are excited to play and they want to play because they are competitors, but they also want to see their teammates play and they understand the benefits long-term. That has been something that has really helped our program over the last couple of years is that because we play a lot of people then guys are able to step fresh and we have competitive depth down the stretch.”