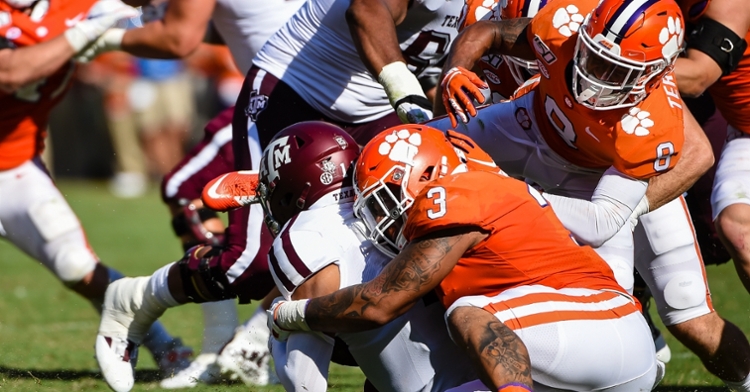 Clemson head coach Dabo Swinney’s football team is on a 17-game winning streak, a streak in which the Tigers have dispatched any and all comers in dominating fashion. Clemson defeated Texas A&M 24-10 last Saturday, and Swinney was asked Tuesday if the “Leave No Doubt” mantra has taken the program to the next level.

“I don't know if it's the next level. Let's just keep doing what we've been doing and that's trying to do our very best each week,” Swinney said. “We try to dominate the opponent. It doesn't matter who we play or where we play, they keep score for a reason so let's try and dominate the opponent and have a killer instinct to our team and do it for four quarters. Let's come out ready, sustain throughout the game and let's finish. We're a long way from where we want to be. We're growing and we're teaching and we're coaching.”

A few Texas A&M players resorted to a friendly game of smack talk during the week leading up to the game, and Swinney said his team accepted the challenge of leaving the talking behind and concentrating on playing.

The 2019 Tiger team has 80 combined freshmen and sophomores, a team that is learning to win as it goes.

“We're just really trying to coach this team and teach this team what it takes to win consistently because we have a room full of guys who think they know but they really don't know,” Swinney said. “Thankfully, we've got a couple of rows full of guys that do know and they've got a very clear vision and they're great leaders. I'm just really pleased with how they've stepped up and performed to this point.”

The next step in the "Leave No Doubt" tour is a trip to Syracuse, a place where a talented Clemson lost two years ago.

“We have a lot to prove every week,” Swinney said. “We didn't leave any doubt when we went up there two years ago. There was no doubt they beat our butt.”

#Clemson coach Dabo Swinney talks the mentality he expects from the No. 1 Tigers on the road this week at Syracuse.