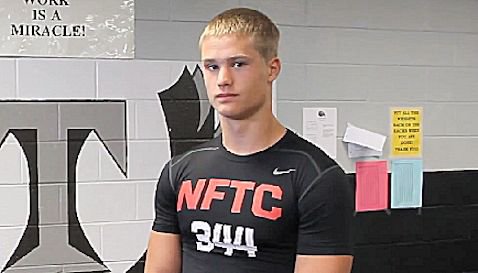 View Full Profile has a chip on his shoulder, and he’s ready to prove that he is one of the nation’s top linebacker prospects as he competes in Nike’s The Opening this week.

The 4-star 2015 Clemson linebacker commit out of Sterling (VA) Dominion received an invite to the prestigious event which will be held this week at Nike’s world headquarters in Beaverton, Oregon. The Opening is the premier summer showcase event for high school recruits, and invites are handed out to the top 162 high school football players in the nation as selected by Student Sports after film evaluation and/or in-person evaluation at one of Nike’s nationwide events such as the Nike Football Training Camps (NFTC).

Smith, who will do a diary for TigerNet during the event, said he was anxious to show the rest of the nation that he deserves to be in the conversation when it comes to the country’s top linebacker prospects.

“Absolutely. Whenever you get an opportunity to be blessed to go to a camp like The Opening and be able to compete with the best in the nation in regards to high schoolers, it's really an honor,” Smith told TigerNet Sunday. “It's very humbling. I just really want to go up there with a chip on my shoulder, because I know I'm not a well-known prospect throughout the nation. I'm not the biggest name on the block, but I want to prove to people that I should be in the conversation as one of the best linebackers in the nation. Just go up and compete and have fun up there. I'm really looking forward to it. It really is a blessing.”

Smith had 94 tackles, including 13 for loss and 3 INT's as a junior, while adding nearly 900 yards and 24 touchdowns, as a running back. The 6-4, 213-pound prospect, who has shot up the rankings after several eye-opening camp sessions, said he is looking forward to receiving coaching from former and current NFL players.

Smith said he watched the festivities on ESPN last year, and told his father that one of his goals was to be a part of the fun during 2014.

“I was following it last year and I was talking with my dad watching highlights of the 7-on-7 SPARQ, looking at their linebackers that made it to The Opening last year,” he said. “I told my dad that, 'I want to be up there. As a matter of fact, I'm going to be up there. That's my goal. I'm going to go up and I'm going to compete for a spot in The Opening.' For it to actually come true, it blows my mind away. I'm just honored and blessed to have the opportunity to go up there and compete with the best.”

Smith said that he will represent Clemson every chance he gets.

Smith will be joined by three Clemson commits, including: wide receiver Deon Cain

What is The Opening?

The Opening presented by Nike Football is four days of dynamic training, coaching and competition for many of the country's most elite high school football players. Every position and every aspect of the game will be highlighted over the course of the four-day program. Past events have featured NFL stars like Jerry Rice, Larry Fitzgerald, Ndamukong Suh, Marshawn Lynch, Aaron Rodgers, Richard Sherman, Patrick Peterson and Darrelle Revis coaching participants in a variety of drills and competitions.

The event will crown winners for the Nike 7ON tournament, Nike Linemen Challenge, and SPARQ Rating National Championship. Designed to give student-athletes the training and knowledge to develop their speed, explosiveness and position skills, The Opening brings together top performers from all of the Nike Football Training Camps and Nike Football SPARQ Combines, combined with other top prospects – all battling for the chance to claim ultimate bragging rights.