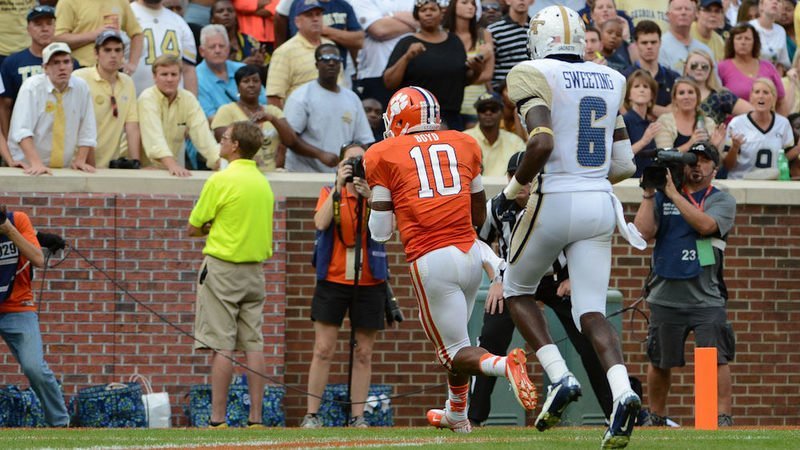 Chad Morris knew the play call as soon as he saw the quarterback move, and it brought back plenty of Clemson memories for Arkansas’ new head coach.

The Philadelphia Eagles stunned the football world, and the New England Patriots, during the Super Bowl earlier this month with a dazzling trick play that looked like it came straight out of the Chad Morris playbook. It has been dubbed the "Philly Special."

With 38 seconds remaining in the first half, the Eagles faced fourth and goal inside the two-yard line. Philadelphia lined up with tight ends Zach Ertz and Trey Burton and receiver Torrey Smith bunched on the left side. Quarterback Nick Foles started in the shotgun with running back Corey Clement. Foles approached the line of scrimmage and appeared to bark signals to the offensive line. As Foles shuffled to the right tackle, center Jason Kelce snapped the ball directly to Clement.

Foles sprinted right toward the end zone as Clement turned left and pitched the ball to Burton, who rolled right and lofted a pass to Foles as he crossed the goal line. The touchdown gave the Eagles a 22-12 halftime lead.

It wasn’t the first time Clemson fans have seen the play, however. Clemson ran a similar play on Oct. 6, 2012, during a 47-31 win against Georgia Tech in Death Valley. With 10:29 remaining in the fourth quarter, receiver DeAndre Hopkins caught a 35-yard touchdown pass from quarterback Tajh Boyd and lifted Clemson to a 36-31 lead. Tiger head coach Dabo Swinney elected to attempt a two-point conversion. Clemson split three receivers to the left. Boyd started in the shotgun with running back Andre Ellington. As Boyd approached the line and barked fake signals, Ellington slid directly behind center.

Ellington took the snap as Boyd peeled right. Ellington pitched the ball to Hopkins as he rolled from the left side. Hopkins floated a pass to Boyd as he crossed the goal line. The conversion gave Clemson a seven-point lead.

Morris, who was Clemson’s offensive coordinator from 2011-2014, recognized the play almost immediately.

“I did. As a matter of, right after we saw it, I wound up texting a few of the guys back in Clemson,” Morris told TigerNet. “I was watching it and saw exactly what was happening. The formation was pretty much a standard formation, but when I saw the quarterback go up and check and move across the line of scrimmage, I said, 'Here it comes.'

“We ran it 2012 against Georgia Tech for our two-point conversion, really when the game was kind of on the line. Tajh catches the ball in the corner of the endzone and we proceeded to really open up the floodgates of the momentum off of that play.”

Where did the play originate? Morris says it was brought to him by a coach named Hunter Spivey, who was a high school coach at Gray Military Academy in Columbia at the time. Spivey is now the running backs coach and recruiting coordinator at Newberry.

“Actually, the play came from a high school coach in South Carolina - we were at a high school coaching clinic there in Greenville in late July - we were just talking back and forth. Hunter Spivey was the guy,” Morris said. “He and I were talking and we were going back and forth on it. He was like, 'Man, this thing would be great,' so we tinkered with it together. Then he said, 'You won't put it in,' and I told him, 'Oh, I bet I would.' Then he said, 'I bet you won't run it,' and I said, 'Oh, I bet I will.' That was it.”

The Tigers actually attempted to run the play before the Georgia Tech game, but it failed in a 49-37 loss at Florida St. The Tigers ran it again in the BCS Orange Bowl game against Ohio St.

“Actually, during that season, we put in early in the year and just walked it. We ran it in practice a couple of times. We had an attempt and were going to run it at Florida State and we snapped the ball over Andre Ellington's head,” Morris said. “This is one of those that once you run it once, that's it in a year. We didn't get to burn it there, so we used it against Georgia Tech. If you remember in the BCS Orange Bowl against Ohio State, we ran it and had Tajh open, but didn't execute it.”

The play goes back to a high school coach helping a college coach think outside the box.