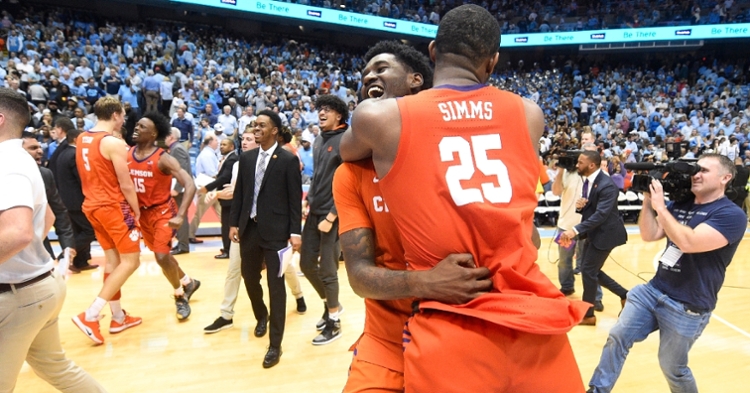 CHAPEL HILL, NC – A daring comeback, sharp shooting, momentum swings, underdogs and prohibitive favorites – Clemson’s win over North Carolina had it all. And Aamir Simms predicted it would happen.

Hollywood couldn’t have scripted the end to an oh-for-59-streak any better than the Tigers who beat the Tar Heels 79-76 in overtime Saturday evening to claim its first-ever victory in Chapel Hill.

North Carolina had two chances to tie the game in the final seconds, but Simms said seeing Brandon Robinson’s final shot clank off the iron was a moment he’ll never forget.

“My heart stopped. It's like watching the movies. It was in slow motion,” Simms told TigerNet following the game. “I was just watching it go and when I saw it hit the back rim all I could think about was to run and find somebody on my team so I could give them a hug. It was something that I'll never forget in my life.”

Everyone in Clemson’s locker room knew of the streak, but it wasn’t talked about.

“You definitely know. People remind us all of the time, especially when the game gets close,” Simms said. “Going into it, Coach (Brad Brownell) told us my freshman year, 'The pressure isn't on us. It's on the other team that has the streak, that has the 59-0. They have to keep up with it. For us, we just had to play our game and not worry about the streak. Just worry about who's on the court and playing together because whoever plays the hardest is going to come out with the victory.”

Not many people gave Clemson a shot at knocking off North Carolina, but Simms guaranteed a win at the ACC media day during the fall.

“I definitely did. People were telling me during the summer that they hoped we broke the streak,” he said. “Hope never gets you anywhere. You just have to go out there and do it. I told my teammates that we're not the ones who have the streak. We're the ones that have to come in here and play our game. They have to worry about that and stress. As long as we stay together for the full 40 and play together it will work in our favor.”

While the current players celebrated in the locker room, the win of the Tar Heels was also for those who came before them.

“It's unbelievable. A lot of teams came in here,” he said. “Unfortunately, we failed to do so during my freshman year when we thought we had a great chance. We had a lot of doubters out there that want to put us away and write us off but for us to come in here and show the world that we can get this done is just unbelievable. It's big for our team and it's big for our school.

“It was great. Quise (Marcquise Reed), Shelton (Mitchell), Eli (Elijah Thomas) were all excited. They've all already hit me up. Coach Brownell's suit was soaking wet, so you guys can imagine. It was just exciting, and you can just feel the love. It was a great feeling and it's something we'll never forget.”

Clemson snapped streak that spanned 16 presidents and 94 years and despite having a one in the win column, Simms said the number just looks ‘crazy’.

“It's definitely good but the number still looks crazy so we've got to keep playing. Every year that we come here, we have to continue to fight back and keep getting wins,” he said.

The Tigers won a gold medal in the World University Games over the summer and ended a decades-old streak, but Simms said there is plenty of work to be done before they can call this a successful season.

*Special thanks to TigerNet interns Robert Barkley and Tim Galbreath for traveling to Chapel Hill and covering the game for us.