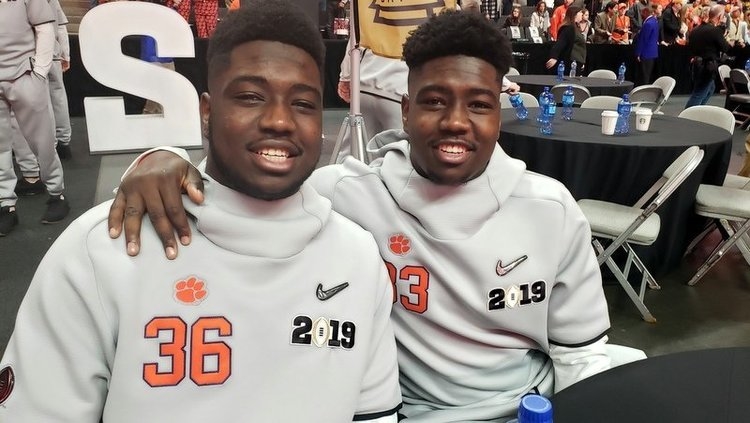 JD and Judah Davis enjoying their final days at Clemson.

SAN JOSE, CA – The College Football Playoff National Championship Media Day was held Saturday morning at the SAP Center, and we have plenty of team related nuggets and quotes to pass along.

The SAP Center – the home of the San Jose Sharks of the NHL – was front and center for the media day, which features coaches and players from both teams available to the media. This is a chance for those of us in the Clemson media to speak with players and coaches we are normally not allowed to speak to, so we spend a lot of our time gathering stories for after the season.

The following is a consolidation of some of those quotes and other team-related news that both Nikki Hood and I gleaned.

In case you missed it, Sean Pollard played center against Notre Dame and acquitted himself quite well. Matt Bockhorst told me that Pollard was “throwing people around” in practice at the center position the week before the game. Will we see more of Pollard there? Some seem to think it’s a possibility.

One source told us that Carman – who is at 340 right now but hopes to be at 315 by fall camp – has been destroying people in practice. He is more than ready to play in place of Mitch Hyatt next season.

As for the Urban Meyer/Dabo Swinney situation – where Swinney predicted to Carman that Meyer wouldn’t last long at Ohio St. – Carman told me that he didn’t look at that as negative recruiting.

Also – Carman is proud of the fact that he was part of a special package against South Carolina. On Christian Wilkins’ TD run, Carman came in as a tackle-eligible and played tight end. Right now, he is a blocker in the package but said if the coaches ever ask him to run a route, he’s ready.

In other words, the best programs sell themselves.

“I'm assuming this is about Dwight Clark: Yeah, actually talked to the team about that last night. It's really kind of unique, I guess he passed in June, and he actually called me not long before that, and I had sent him a jersey, and I kept his voicemail. I couldn't delete it because he was – it took him a while to get the message out, but he was so appreciative of that jersey. I mean, here's a guy who's got Super Bowl rings and you name it, and he was talking about how he couldn't wait to frame that jersey and put it up in his office and how he still roots for his Tigers. So it's just kind of neat that we're getting ready to play in a stadium that I think probably has a statue out there of him. So we've got a couple things involved that I think will be special for our team.”

DeHond had neck surgery back on Halloween and hopes to be ready by spring ball. Whenever he would hit someone his arms would go numb, and team doctors were hopeful it would go away on its own. When it didn’t he elected to have the surgery and says rehab is going great. He would ideally like to be back by spring practice, but said he isn’t sure right now. If he can’t play again – which is a possibility – he said he is at peace with it.

Feaster said that transferring out for his senior year is a possibility, but he hasn’t graduated. If he doesn’t graduate before he leaves, he would have to sit out a year if he goes to another FBS program. He said it’s all up in the air right now, and it makes it easier that all of the running backs get the same number of carries in the Clemson offense.

I did an interview with him about his 4th quarter video, and he said they did it in one take. He said the idea was his, and he loved being a part of it. He also said he saw Syracuse watching the video before the deciding 4th quarter last fall, and he likes to believe it played a small part in breaking the will of the Orange. He also believes the actual work in the summer played a bigger part, as he should.

Nikki spent a lot of time talking to assistant coaches about the 2019 signing class and looking forward to spring practice.

*The most interesting conversation I was with quarterback’s coach Brandon Streeter, who I feel like I’ve only talked to about an upcoming quarterback controversy…something we won’t have in 2019. I asked him about 2019 quarterback signee Taisun Phommachanh, who is already on campus and will watch the national championship with the other early enrollees Monday night, and Streeter’s eyes lit up.

Streeter compared Phommachanh’s skillset to that of Deshaun Watson. He said Phommachanh is coming in around 6-4 and 210, bigger than many of the quarterbacks when they first enroll at Clemson. Streeter said that Phommachanh’s athleticism is off the charts.

*A lot of people will talk about what Clemson is losing on the defensive line in 2019, but tight end’s coach Danny Pearman may have his most difficult challenge to date.

Milan Richard, Cannon Smith and possibly Garrett Williams will all move on after Monday night, leaving J.C. Chalk and Braden Galloway as the only two scholarship tight ends with any experience.

Pearman said the situation with Galloway is frustrating but they’ll let the appeal process sort itself out and go from there.

2019 signee Jaelyn Lay is already on campus and Pearman said spring practice and summer workouts will be big for him. Physically, he’s mature, but how well he can grasp and retain the playbook will determine how much of an impact he’ll have next fall.

*Do you have an update on Christian Miller's status?

“Christian Miller is questionable for the game. He hasn't been able to do a lot in practice. We'll sort of see what he can do today and sort of further evaluate his circumstance and see if he can be effective enough to contribute in a game.

“Well, obviously it's an opportunity for someone else. We've lost a significant number of players at that position, starting with Terrell Lewis, Chris Allen, now Christian Miller, which was a position that we thought was somewhere we had a significant amount of depth. But this will create an opportunity for someone else who may not have the same experience, but we're confident that they can get ready to play and hopefully do a really good job for us.”