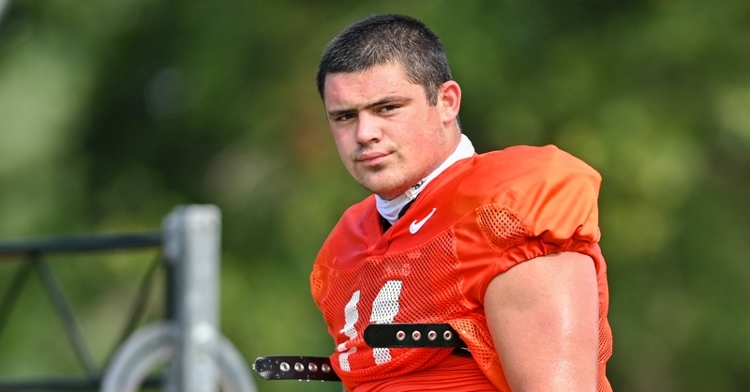 Bryan Bresee grew up in a competitive family filled with Division I athletes and learned to hate losing at an early age. There are times that competitiveness and excitability might get him in a little trouble, but he’s the player he is today because of how he was raised.

Bresee recorded a half-sack and blocked a field goal in the Tigers’ win over Wake Forest Saturday in Winston-Salem. He was just happy to play.

“It was awesome, especially being so unsure early on about the season," Bresee said. "Just getting out there with my teammates and playing. It was really relieving, honestly, to be out there and playing and doing what we've been working so hard for this offseason."

However, he jumped offsides on his first collegiate play.

“I was running out there for the first time, I was super nervous," Bresee said. "There were no fans there but just the idea of being out there in my first college game. I was definitely a little bit shaky. I get out there and the first play I jump offsides which didn't really help. But getting the half-sack and blocked kick was a big relief for me. Kind of when all the butterflies went away and you are just out there playing football."

"Even when I was really young, I learned to hate losing no matter what we were doing," Bresee said. "It didn't matter if we were running down the street. It stuck with me and molded me. When I was a sophomore in high school we were at a family reunion. My sister plays basketball in college. We were playing on concrete. I'm about 6-5, 260 pounds at the time. It's 5-on-5, just family.

“I'm dribbling full speed down the court and my sister thinks it's a good idea to step in front and take a charge around halfcourt. And I just run her clean over. That's not a normal thing for a family to do playing backyard basketball outside and your sister decides to take a charge with no refs there. Things like that, I've always grown up with."

Bresee is wearing the familiar No. 11 this season – not a typical number for defensive tackles – and it’s a number he did a little wheeling and dealing to get.

"I had to make some trades to get this number," Bresee said. “When I decided to commit, there were already a bunch of people who had chosen numbers. I look at all the numbers still available and I saw 45 and I knew [linebacker] Sergio Allen wore that in high school. He had already chosen 11, so I was going to see if I could kind of make something happen. I get 45 and then I text Sergio, 'Hey man I knew you wore 45 in high school, I don't think it looks too good on d-linemen.' And he was like, 'Yeah you're right I'll keep 45.' I was so thankful I got kind of lucky."

The former 5-star is rooming with another former 5-star in quarterback DJ Uiagalelei. The California QB and the Maryland bruiser are now best friends.

"Me and D.J. have a really good relationship," Bresee said. "Since being here, we have been super close. When he was out there (playing) I was screaming at him and there were no fans so he was looking over at me and flashed me a thumbs up because I was going crazy for him on the sidelines. We are super supportive of each other and it's a good feeling to have somebody like that for you. We do basically everything together. We've been best friends since we got here."