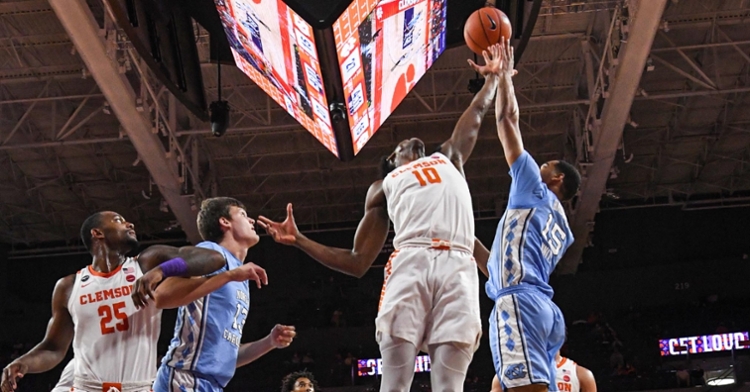 The Tigers have defeated UNC in three of the last four meetings. (Photo courtesy ACC)

The Clemson men’s basketball team improved to 7-1 inside of Littlejohn Coliseum Tuesday with a win over ACC foe North Carolina. The Tigers accomplished a feat that no other team in program history had accomplished as well with the 13-point victory, beating North Carolina three times in a four-game period.

Clemson had some extra motivation going into the contest and it showed.

Following his 10-point, six-rebound night, Clemson senior forward Aamir Simms told the media about a team meeting that Brownell and his players had following a 79-53 loss to Duke last Saturday.

“Soon as we got back from Duke, usually we’ll meet for a few seconds in front of the bus, but we came back and probably spoke for an hour and a half,” Simms said. “We really talked about what we wanted to accomplish and our fight and our grit. I think a lot of guys took that challenge personally, and that’s what a lot of guys needed to hear.”

The Clemson “GRIT” was on full display Tuesday night in the Tigers' fifth ACC win of the season. Bodies were flying all around the court jumping for loose balls, the passing was pristine in finding the open man, and the Tigers did not have to rely on the three-point shot as of late with the pick-and-roll working well against the Tar Heels. Clemson also forced 17 UNC turnovers, which they converted into 13 points.

When asked about the meeting on Saturday, head coach Brad Brownell did not hold back.

“The meeting was stuff we’ve been talking about, and stuff that I thought was really disappointing in our performance against Duke,” said the 11th-year man in charge of the Tigers. “We’ve let bad offense affect our defense and we have to practice better and play better, all things we talked about. I told them I’m at the point where my leash is a little shorter, and that happened today.”

The last line of Brownell’s answer was what he was looking for after the meeting, and something he hopes the team can come together around moving forward in the season.

“Hopefully challenging the players can get them to come together a little bit and rally them individually to take accountability and ownership into their performance," he said.

If you’ve ever supported or watched a team that was going through a slump, you often times here about a “team meeting” or a “players-led meeting”. It’s one of the oldest tricks in the book, and Brownell and the Tigers hope they can right the ship moving forward the rest of February and into the ACC Tournament.

Clemson will be back in Littlejohn Coliseum on Saturday when they host the Syracuse Orange. After the last few games and the shooting woes from behind the arc, Clemson will need to find a way to beat the now-famous “Boeheim zone” (2-3) if the shots continue to not fall.

Last season the Tigers took down the Orange in Littlejohn on the heroics of Clyde Trapp’s last second, go-ahead layup to win, 71-70. The game will tip off at 2 p.m. and will be broadcast on ACC Network.