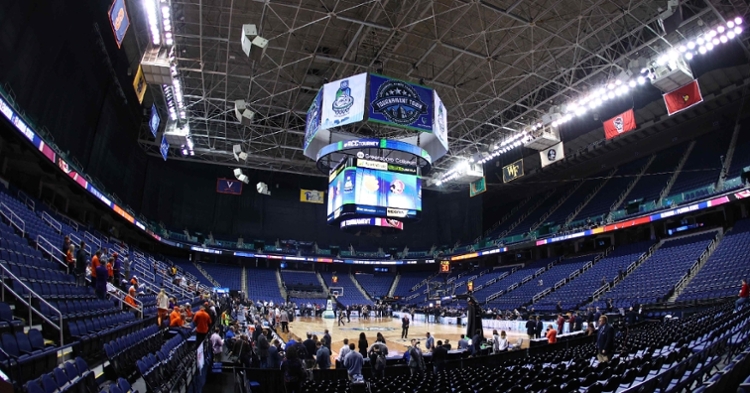 GREENSBORO -- The minutes leading up to the scheduled 12:30 p.m. start to No. 1-seed Florida State taking on No. 8-seed Clemson were a spectacle in itself Thursday.

The only fans in the stands were those family and friends of players on hand in Greensboro Coliseum, after the precautionary announcement to hold Thursday’s games without a full host of fans.

Both teams warmed up on the floor out of uniform a couple hours prior, but around 30 minutes to the scheduled tip, Florida State’s pep band played the Seminoles on to the court. Clemson never followed, however -- their pep band wasn’t even in the building yet.

Minutes later, a Florida State official whistled to the team to gather and they left the court. Brad Brownell was likely already delivering the tough news to his team still in the locker room.

The 2020 ACC Tournament was canceled due to the growing threat of COVID-19 (or coronavirus), and short of a bid to the National Invitational Tournament -- that may or may not happen as scheduled either -- the Tigers’ season is done at 16-15.

“There were some guys who were really down,” Brownell said. “First, they are angry. A couple guys were angry and a couple guys were down. I think you start out angry and it kind of really hits you. For some guys, careers may be over. This is pretty special. This is such a special tournament. The kids want to play in this.

“They want the opportunity to play in these kind of meaningful games. Initially, guys were upset, and then I think it turns to a little bit of sadness. It won't be easy for these guys the next 24-48 hours. That's for sure.”

ACC commissioner John Swofford announced that the top-seeded Seminoles (26-5) would be the ACC’s automatic qualifier for an NCAA Tournament he couldn’t say with certainty will happen either.

Clemson stuck around to join Florida State on the court while they were honored as ACC champion.

“I appreciate the class of the Clemson Tigers, being on the floor right now. When I spoke with coach Brownell, his immediate reaction was that we (Clemson) want to be on the floor. I wouldn’t expect anything less, because he’s a class person and a part of a class university and a class program.”

Brownell said he polled two team leaders in gathering whether his team was prepared to play in the wake of a slew of cancellations and the NBA season’s postponement -- and he said he was confident they were ready if the ACC gave the word. But he also knew other opinions he had to weigh.

“You just kind of address the short-term pain and that's very significant you know,” Brownell said. “When we recruit these kids we promised their families that we're going to take care of them and we take that responsibility very seriously. Try to do what's best for your players and you know sometimes they don't even know what’s best for them. We don't always know, but I told them the same thing -- that guys, you got to trust people in leadership positions.

"Some of you guys are fathers and gonna be fathers and you're gonna make difficult decisions to your families that aren't always popular, but you have to do what you think is right and I think we're doing what is right. It's hard because again we all want to play and this is a big deal. And kids train and coaches coach all year to be in these kinds of games and these are the best games of the year, so you hate the fact you don't get to compete in them...

“At the same time, you don't know how somebody's mom feels or family feels. I just worried we were going to feel different at 7 o'clock then we did at noon. I'm glad that if we're going to cancel this thing and we were going to do it tomorrow or later -- that we do it now and get these guys back to where they need to be.”