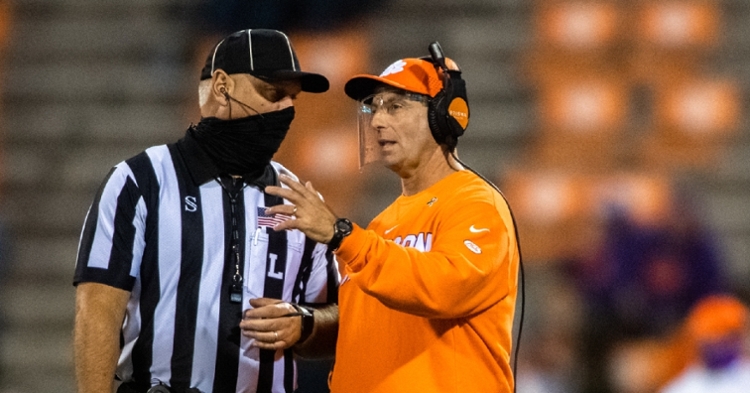 Swinney said his team needed some adversity heading into the Miami game.

A plucky Virginia team might have just been the test Clemson needed heading into a primetime showdown with Miami.

A typical Sunday for the Clemson football player involves plenty of rest and rehydration. Those who need treatment flow in and out of the Reeves Complex all day, and the first Miami game film is sent out to the players’ iPads. Miami will have everyone’s attention after a tough night against Virginia in which the Tigers committed eight penalties for 65 yards (Virginia had one penalty) and struggled to gain any type of offensive consistency.

Clemson’s defensive line didn’t generate enough pressure to really affect the Virginia passing game and the Tigers tallied just four tackles for loss on the night. When Virginia quarterback Brennan Armstrong was flushed from the pocket or escaped on designed runs, linebackers were either in the wrong spot or allowed themselves to be blocked out of the play by wide receivers.

There is no doubt the Tigers are missing defensive tackle Tyler Davis in the middle of the defense. Davis hasn’t played since the opener at Wake Forest, and while he wasn’t listed on the unavailable list provided before the game, he didn’t make an appearance against the Cavaliers. Virginia’s offensive line is probably the best in the ACC and shouldn’t be taken lightly – that’s an experienced group that draws rave reviews from Pro Football Focus – and Davis could have made a difference.

In other words, a very talented Clemson team walked away with an 18-point victory over a pretty good Virginia team in which it struggled to make plays on first and second down, didn’t generate much pressure defensively and allowed too many chunk plays. That’s bad news and good news all rolled into one.

The good news is that the coaches shouldn’t have any problem in getting the players’ attention heading into this week’s game against Miami.

The Miami offensive line has been okay – not as good as what Virginia has – and the defense makes plays.

But King will be the focus this week.

“He’s a great quarterback,” defensive tackle Bryan Bresee told the media after the game. “I’m sure (defensive coordinator Brent Venables) will put together a great game plan like he does every week and we'll do the best we can to fulfill it. And we'll just play our football, play how our defense always does.”

Cornerback Andrew Booth, who had a spectacular interception against the Cavaliers, said the Tigers have work to do to get ready for King.

“He’s very good, you’ve seen him,” Booth said. “We need to make sure we always have a guy on him in coverage. But, we’re going to go to the drawing board and scheme against him, try to do what we do.”

Head coach Dabo Swinney said the Tigers didn’t do a good job on Armstrong, who isn’t as mobile as King.

"We were inconsistent in doing our job, inconsistent in containing the quarterback, got us on the edge a few times, some tackling,” Swinney said. "There are some things we will need to get corrected quickly because we have a big challenge next week. We certainly did not do a great job of containing Armstrong tonight."

Despite some of the warts, there were plenty of bright spots and the Tigers should be ready to go against the Hurricanes after facing adversity for the first time this season.

“That is what good teams do, they respond. And we really haven’t had any adversity,” Swinney said. “If you think about those first two games there have been some bad plays but there really hasn’t been a moment where the game was on the line or you felt like you didn’t have control of it. And then you’re playing a really good team – they were in the championship last year and have some really good players – and then you have some adversity and you’re out of synch and miss a couple of plays here and there.

“But you respond, and I am happy with how they handled the adversity, and it will make us better. You don’t like it when you have to handle that stuff, but it is a challenge I think we needed and will serve us well when we get back to work on Monday.”