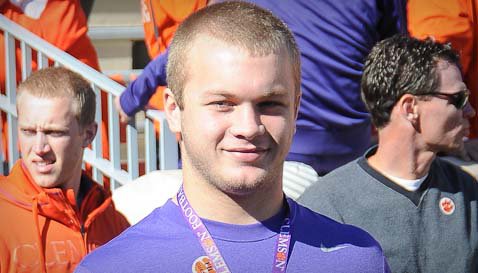 Boulware is a hard-nosed throwback

Two Clemson commitments managed to shine this past weekend, proving the future of Clemson football is very bright indeed.

DeShaun Watson
Quarterback
6-3, 190
Gainesville, GA
View Full Profile , a 2014 quarterback out of Gainesville (GA) and also a Clemson verbal, led his high school team to its first state title since 1925 Friday night at the Georgia Dome.

Brent Venables
Defensive Coordinator / Linebackers
View Full Profile took over, is one of South Carolina’s top-ranked players. ESPN rates him a four-star prospect who ranks No. 2 overall in the state.

During the Shrine Bowl, Boulware recorded a game-high nine tackles, 2½ for loss, and he intercepted a pass and recovered a fumble and was named South Carolina’s defensive most valuable player.

Boulware said the South Carolina team played with a chip on its shoulder, playing against a North Carolina that was full of 4-star recruits.

“It was pretty fun,” Boulware told TigerNet. “We were definitely the underdog, and we talked about it all week during practice and during the game. We knew they had a bunch of highly-recruited guys, and we proved that being highly-rated on those recruiting sites doesn’t matter. They had a lot of 5-stars and 4-stars and something like 25 guys that are committed to big-time programs and we had just eight. So it really doesn’t matter, and we proved we had a lot of good football players. It was a lot of fun.”

Boulware plays with an attitude, and said he hopes to one day be that hard-nosed linebacker that Clemson fans have been looking for.

“I am happy that all the hard work is paying off,” he said. “I have worked my butt off to get to this point. A lot of the guys have built me up to be the old school, hard-nosed linebacker, and I guess I showed some of that in the game. I am glad they got to see that, because that is definitely who I want to be.”

Watson proved his mettle on the offensive end. The Gainesville junior completed 28-of-36 passes for 329 yards and three touchdowns and added 95 yards and two touchdowns on 14 carries to lead his team to a 49-13 win over Ware County at the Dome in the Class AAAAA championship game.

Watson also broke a state record during the first quarter of the game – he now has 9,502 career passing yard, breaking the record held by Metter's Zach Stanford that was set almost a decade ago.

Watson's three touchdown scoring tosses pushed his season total to 50 and his career mark to 108. He finished this season with 4,031 yards passing. Watson also helped lead Gainesville to at least 40 points in each of its playoff games, and the Red Elephants topped the 60-point mark two times. Ware County went into the game allowing just 8.6 points per game.