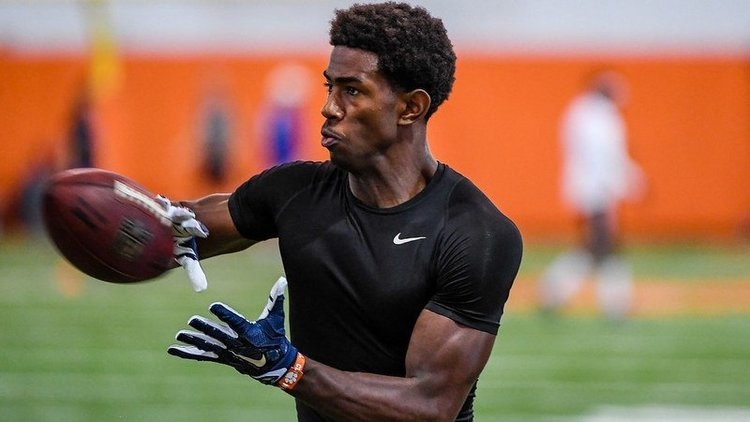 Collins makes a catch during camp

The National Championship Game for the 2022 season will be played on Monday, January 9 of 2023 in Los Angeles Stadium at Hollywood Park in California, and Clemson head coach Dabo Swinney thinks that game could be quite a homecoming for 4-star receiver Beaux Collins.

Collins is a teammate of 5-star quarterback commit DJ Uiagalelei at Bellflower (CA) St. John Bosco and he made the trip to Clemson this week for Swinney’s high school camp. Collins turned in one of the more impressive performances in camp and walked out with a coveted Clemson offer, capping off his visit.

“To me, the Clemson offer is a kind of validation that I am one of the top recruits in the nation,” Collins said. “But I know I still have a lot of work to do. Clemson right now is top two for me, along with Ohio St.”

Collins said he hopes to make a return trip to Clemson for a game this season, and then said he didn’t mind playing away from home.

“I met Amari, Tee Higgins, Justyn Ross, and Trevor Lawrence and a couple of other players when we were hanging out with them before and after the camp,” he said. “They are pretty cool dudes. For Tee Higgins, meeting him was like a dream come true. I see him play on TV every weekend, and just to be able to meet him and have a conversation with him was great. And then to have them give me pointers on receiving stuff was amazing to me.”