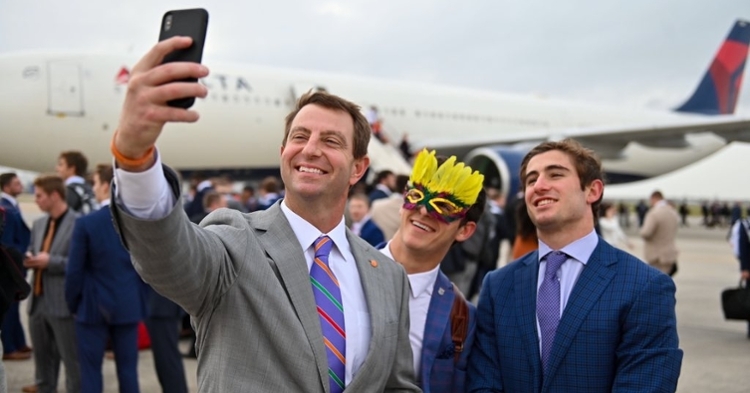 NEW ORLEANS, LA – I was sitting outside the door of a CVS with a fellow sportswriter in the French Quarter late Friday when a familiar voice interrupted a Clemson vs. North Carolina basketball discussion.

It was Clemson head coach Dabo Swinney headed to get beignets at the Café du Monde. Welcome to the end of a busy first day on the ground in New Orleans.

Nikki and I drove overnight Thursday to get to the Big Easy, getting to the team hotel around 4:30 am. We slept a few hours, checked in at the media hotel to get our credentials and schedules and almost immediately were on a bus to the airport to meet the team.

It was interesting in that we were actually at the airport and waiting on the team a few minutes before they took off from GSP. We had a long time to wait but the wait was short thanks to the arrival of the 3rd Line Brass Band, a group that regaled us with the best of ragtime and swing.

It wasn’t long before the team plane arrived and of course one of the first people off the plane was Swinney. The orange carpet the airport tried to put down for the Tigers on the tarmac almost took off in the wind, and Kathleen Swinney, in true form as the wife of a head coach, was right there with the airport workers trying to make sure the carpet stayed down.

I get a lot of messages from people who always want to know, “are the players up? Are they hyped?” My answer is always the same – it’s business as usual. I remember an interview I did with Miguel Chavis before a big game back in 2009. I asked him if he got a little extra juice from a big game, and he smiled at me and said, “It’s ok to get hyped up. But that lasts until the first play when you get hit in the mouth and from then on it is just football.”

That’s been the mantra of this team under Swinney – the players are serious when they call these trips “business trips.”

That doesn’t stop everybody from having a little fun, however. Swinney was taking selfies on the tarmac with his players and generally having the time of his life. The players were taking turns posing with the 2020 Playoff logo set up on the tarmac. This team is not tight, that’s for sure.

Linebacker Chad Smith told us that the long wait has been a few days too long and he’s ready to hit someone in an opposing uniform. Right tackle Tremayne Anchrum echoed those comments and both players said this is a team that wants to go on the attack as soon as possible.

Further good news for the Tigers – all players are present and accounted for. There are no suspensions, no has been sent home, and the entire team appears to be as healthy as they’ve been in a while. We have media day early Saturday and Clemson will have a practice at Yulman Stadium afternoon on the Tulane University campus.

The day ended with a nice meal in a little Italian restaurant in the French Quarter followed by beignets at Café du Monde. Nikki ran over to a CVS to get a few drinks for our hotel room and I was sitting outside waiting on her when I heard that familiar voice.

Swinney and his big group were headed to get beignets when he noticed I was sitting with Zach Lentz, a fellow writer whose wife Michelle passed away from cancer on New Year’s Day. Swinney and his wife Kathleen immediately grabbed Zach and tears and hugs were shed all around. People are always asking me if Dabo is fake or if he is like what you see on TV, and I tell them that what you see is what you get. Here is a coach making $9 million a year and he isn’t afraid to minister to someone who is hurting in the middle of the French Quarter.

With that done, Swinney and his big group headed for their beignets – Swinney’s smile the biggest in the group – and the first day in New Orleans was done.