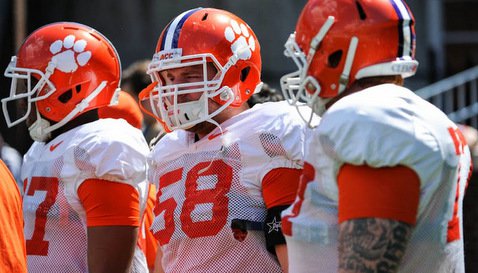 Norton is expected to be a leader this season

CLEMSON – The Boston Red Sox took the hirsute look and rode it all the way to a World Series Championship in 2013, the saying “Fear the Beard” a common theme in a group of players that took shaggy over clean in wearing beards and long hair all the way to the title.

The Red Sox started the trend early in spring training of 2013, with two of the more colorful members of the team – Jonny Gomes and Mike Napoli – sporting facial hair. Once the winning began, all but one reliever followed the practice and a championship was born.

Playoff beards have long been the norm in the NHL, but the beards and mountain man look have now taken root – excuse the pun – in dear old Clemson as members of the Tigers’ offensive line have grown beards in anticipation of the upcoming season.

Ryan Norton
RS Jr. Offensive Line
#58 6-3, 270
Simpsonville, SC
View Full Profile told TigerNet following Friday’s practice that the Beard Gang started out as a joke, but now it’s a way for the players along the offensive to develop an identity and chemistry.

"I think we were all just joking around,” Norton said. “Me, Eric Mac Lain, Kalon Davis

Spencer Region
RS Jr. Offensive Guard
#74 64, 350
Cullman, AL
View Full Profile . So Mac would get us all to take a picture and then he'd post it on twitter with #BeardGang.

"Then we had guys on the team asking us, ‘How can I get in on that? And we said well you have to grow a beard. Then you got guys like Maverick Morris

Maverick Morris
RS Fr. Offensive Line
#69 6-4, 285
Broxton, GA
View Full Profile who can't grow a beard, so we have a pretty good time with that. It's kind of a way for us to poke fun at each other. It gives us something in common.”

Norton did make a point of saying that he has had a beard since last season.

"I've had a beard since last year," he said. "Kalon hasn't shaved since the winter of last year. He's got a pretty thick beard. Usually I don't shave during the season. It's just kind of funny. We know the other teams that have done it in the past. That's not necessarily why we are doing it. We're just having fun with it."

This is what I'm gonna look like by the end on the season. #BeardGang pic.twitter.com/d1nFoJBa2b

Norton, now a junior, is one of the graybeards – figuratively and not literally – of a group that will look to the Mauldin native for leadership.

“For me, I am really having to step up from a leadership standpoint this year,” he said. “BT ( Brandon Thomas