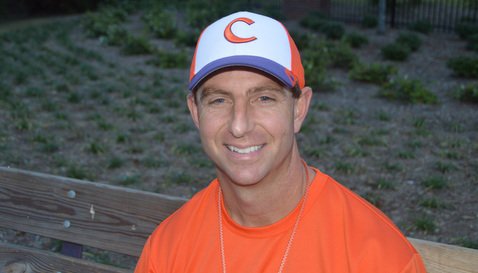 Isaiah Battle
So. Offensive Tackle
#79 6-6, 280
Brooklyn, NY
View Full Profile may finally be starting to figure things out, and that can only bode well for Clemson’s offensive line

The sophomore left tackle might be Clemson’s most talented offensive linemen, but has played sparingly at times this season after punching N.C. State defender Jarvis Byrd late in Clemson’s 26-14 win over the Wolfpack all the way back on Sept. 19th.

Dabo Swinney
Head Coach
View Full Profile was asked following Wednesday’s practice if Battle would be an option on the offensive line going forward, and Swinney knocked on the wooden bench he was sitting on before telling the media that Battle has caught his eye in recent weeks.

“I am glad you asked about him,” Swinney said. “Out there at practice today I was just bragging on him. Knock on some wood here. I was just making a comment today, ‘You know what that old guy looks like he is starting to figure it out.’”

Swinney said that Battle is practicing better, paying more attention to detail in the film room and doing the little things that earn playing time.

“I’m very encouraged by what I have seen out of him,” Swinney said. “I’m very pleased with where he is. He is coming. He is coming. I put him in the category of Vic Beasley last year. You know? You can just see it. The light is starting to come on and he is starting to like it a little bit. He is starting to see the big picture. Hopefully, we will have the same type of result that we had with Vic.”

It’s been obvious that Battle has been in the doghouse with the coaches, but Swinney said he wouldn’t rule out Battle seeing more time in the last third of the season.

“We will see how it goes. Maybe,” Swinney said. “Hopefully, he will get in there, but right now he is tutoring and mentoring behind a good one there in Brandon Thomas

Brandon Thomas
Gr. Offensive Line
#63 6-3, 305
Spartanburg, SC
View Full Profile . Brandon is by far our best player right now. He is playing lights out for us. But hopefully, we will be able to get him some action this week a little bit more than we have.”

Shaq Anthony
RS So. Offensive Tackle
#76 6-3, 265
Williamston, SC
View Full Profile have struggled at times – a move that would let Battle take over at left tackle, and he said that all options were open at this point.