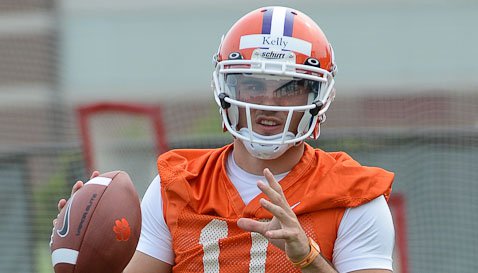 Kelly has been impressive and could avoid a red-shirt.

Dabo Swinney
Head Coach
View Full Profile said Wednesday that all three are still in the running for the spot.

“We haven’t really made a pecking order right now,” Swinney said after the Tigers ran through a situational scrimmage in Death Valley. “Kelly is right in the mix and is competing his tail off with all of them. I have been pleased with Cole the last couple of days. Morgan Roberts is a guy that has a ton of upside and he has had some very good days in fall camp. One thing I like about Morgan is when he doesn’t have a good day he usually comes back the next day and makes up for it. Because that is who he is – in my opinion he is a great competitor. We are going to keep their feet to the fire and challenge them and maybe see a little separation.”

The most intriguing player in the group is Kelly, the confident New York native who is the nephew of former Buffalo Bills quarterback Jim Kelly. The big question for Kelly is can he learn enough of the playbook and can he provide enough of an impact to escape a redshirt year.

“I think the biggest thing there is playing a guy who has already been redshirted versus a guy who hasn’t,” Swinney said. “You look at that situation differently. You don’t want to burn a redshirt year if you don’t have to. We would like to redshirt him – that is what we want to do. But we told him to come to play and compete every day and see how it all plays out.”

Swinney said that Kelly has been impressive through the first few weeks of camp.

“Chad Kelly is a guy that has been here just a few weeks, but he is operating the system at a pretty high level,” Swinney said. “It has been impressive to see him go out there and function effectively the way he is right now. No matter what group you put him in, he moves the ball and makes plays with his arm and his legs. I just like his competitiveness and how he has come to compete. A lot of that goes to how he prepared this summer – in there watching film on his own and things like that.”

The incumbent No. 2 guy – Stoudt – has raised his level of play in the last week.

“Cole Stoudt is a guy that I thought really showed up today and did some really good things,” Swinney said. “Cole took his team down for a couple of touchdowns and had a good two-minute drive to win the game. He also had a really nice, long touchdown pass to Gerome Hopper.”

Swinney said that all three bring something special to the table.

“I think Morgan and Chad have more similarities than differences,” he said. “They both have big arms and love to run the ball, and when they do run the ball they have a nastiness to them. All of them have size. Cole is the bigger one of the bunch from a height standpoint, and he throws the deep ball well. He is a good runner but not as aggressive as the other two.”