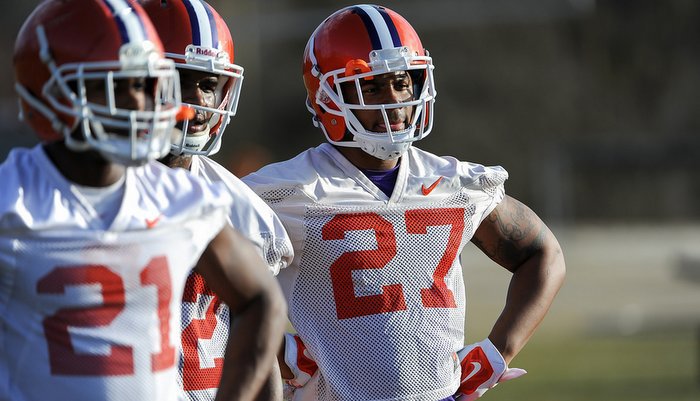 Another name we are hearing in camp is C.J. Fuller (27)

Chad Morris
Offensive Coordinator / QBs
View Full Profile told the media last August that Clemson’s running back situation was the best it had been in years, citing depth and talent across the board.

That depth was quickly put to the test – Zac Brooks

With all of those players back except for Howard - and the addition of freshman C.J. Fuller

C.J. Fuller
RS Fr. Running Back
#27 5-9, 215
Easley, SC
View Full Profile – Clemson is loaded at the position as six running backs are vying for a spot on the depth chart.

"It's a very good group. It's why we didn't sign a running back this winter," Swinney said earlier this week when asked about the numbers at the position. “I agree with you, we have an outstanding group of backs. We need them. We’ve been working toward this for a while. And we’ve had to be patient.”

Brooks, who is fully recovered from his torn Achilles and is participating in all drills, took it a step further.

“As you know, we’ve got really talented running backs,” Brooks said. “Anybody can step in and do the job.”

Leading the way is Gallman, who came into his own midway through the 2014 season and rushed for a team-high 769 yards. Now checking in at 212 pounds, Swinney says he expects even more out of Gallman in 2015.

Dye was expected to be the back that put the smash in Morris’ “smashmouth spread” offense, but he has been limited by injuries as well. He returned late last year and rushed for 151 yards and a 4.7 yards per carry average in limited duty.

Swinney said that all Dye needed was a spring practice in order to realize his full potential, and they’ve seen glimpses of that potential this spring, right along with the freshman Fuller.

"Tyshon looks the best he's looked since he's been here," Swinney said. "He's just moving different. Nobody ever talks about C.J. Fuller, and this kid is really good.”

Brooks was set for a breakout season last fall when he suffered the injury and hopes to take up where he left off this spring. For those who think Brooks will move out to wide receiver, however, don’t count on it.

“Zac Brooks, it’s a shame that we’ve only seen glimpses of Zac Brooks in his career,” Swinney said. “He’s really talented, smart, fast and committed. I really don’t see Zac as a receiver. He could function as a receiver, but he’s at the right position for this team and for his future.” 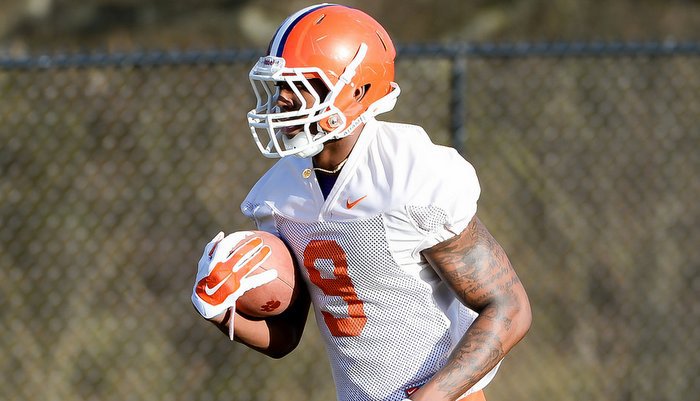 Swinney says Wayne Gallman is up to 212 pounds

"With the pace at which we play, you know 80 snaps a game that's tough for one guy to play all those snaps over the course of an entire season," Elliott said. "Then you start talking about the number of carries, you got to have more than one guy. They play a violent position. Everyone sees them when they get tackled, but there is a lot of times when they take hits in pass protection, when they are faking they get tackled so those guys have a lot of wear and tear on their body. So you've got to have several guys that can get in there."