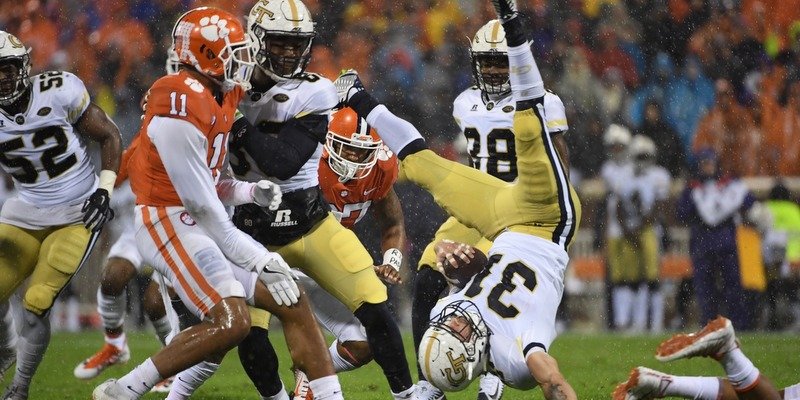 Since Brent Venables' arrival at Clemson, the Clemson defense has shut down the Georgia Tech triple option.

Despite their success, Austin Bryant knows that at any time, the Yellow Jackets’ offense can break out a big play any time.

“A team like this can bust one on you in a hurry if someone is undisciplined,” Bryant said. “We definitely just have to stay locked in on our job and not try to do too much.”

Playing an option team definitely makes it tough on the defense, but the Tigers’ defense is athletic enough to perform well.

“Option offenses are a lot different because you go from playing end, to linebacker, to three-technique sometimes,” Bryant said. “It can be tough, but we have the guys that are flexible enough to do all three and have the ability to play all three at a high level.”

Clemson has spent time preparing for Georgia Tech’s offense in the offseason so they had some knowledge of how to handle the Yellow Jackets when game week came around. The preparation is how the Tigers are so successful against this defense.

“It helps a lot to get those reps early in the year before you even start playing games, so you have some sort of foundation to build upon when that week comes,” Bryant said.

Although playing Furman and Georgia Southern have helped prepare the Clemson defense, Georgia Tech is on a different level talent-wise. They have more athletes that compare to Clemson than the other two.

“They have really good athletes. They can compete with us talent-wise,” Bryant said. “They all have three really good schemes and they all run it differently. Georgia Tech does it better than anybody and they have been doing it for years at a high level.”

Georgia Tech’s Taquon Marshall is the Yellow Jackets best player so the Clemson defense will need to make sure they keep eyes on him. But it is important that the Tigers do not focus just on Marshall, so they do not get beat in other ways.

“He’s a really good player. You always want to defend a team’s best player,” Bryant said. “But if we keen in too much on him, then they can kill us with the dive or the pitch. You have to take your chances but also defend your responsibilities.”

The defense will need to stay disciplined against Georgia Tech if the Tigers want to get the win. All around, the Tiger’s will need to bring their A-game to Atlanta if they want to leave 1-0 in ACC play.