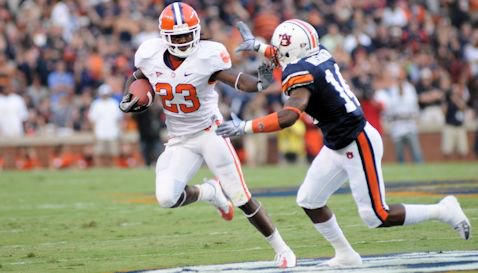 This week’s game between Auburn and Clemson has the feel of an Old West shootout – offensive coordinators and good friends Gus Malzahn [Auburn] and Chad Morris [Clemson] are like two gunslingers being turned loose in a place called – fittingly – Death Valley.

Whether this turns out to be a shootout or a siege really depends on the play of the two defenses and which one can make the crucial stops.

All of the pieces are in place for what could be one of the best games of the year. Cooler weather, a sold-out stadium, two offenses that are fun to watch and an electric feel for an early fall Saturday. Let’s take a look at the matchups.

NO. 21 AUBURN AT CLEMSON

WHEN AUBURN HAS THE BALL

Auburn offensive coordinator Gus Malzahn wants to run the ball, pure and simple, in order to keep the pressure off new quarterback Barrett Trotter. Trotter has been steady (33 of-46 for 407 yards, 5 TDs and 1 int) if not spectacular, and he will have to protect the football against a Clemson defensive line that can’t wait to rush a quarterback, especially after Wofford attempted just eight passes last week. The Auburn running game starts with sophomore Michael Dyer, who has carried 32 times for 207 yards this season, a 6.5 yard average. Dyer isn’t going to bowl over the interior line – Malzahn creates space for Dyer and lets him find creases out on the edge. This means Clemson’s linebackers and defensive backs will have to help in run support while being cognizant of the fact that Auburn likes to sell the run and then hit passes over the top. It happened twice last year as Clemson defenders got caught on stutter-and-go patterns in Clemson’s overtime loss. They key for the Clemson defense will be, of course, tackling. If the line and linebackers can stop the running backs from getting to the second and third levels – a problem the last two weeks – it will force Trotter to the air. Receiver Emory Blake (10 catches) is definitely a weapon, but you always have to worry about running back Onterio McCalebb (9 catches) and tight end Philip Lutzenkirchen (just 5 catches, but 4 have gone for touchdowns). Stopping them will be on the shoulders of the linebackers, who can’t get out of position or they’ll give up the big play. Steele might leave the starters on the field longer this week than he has the past two weeks in an effort to make sure that Brandon Thompson

Rashard Hall
RS Jr. Safety
#31 6-2, 200
St. Augustine, FL
View Full Profile do most of the heavy lifting, even though Hall’s knee injury is a concern.

Andre Ellington
RS Jr. Running Back
#23 5-10, 190
Moncks Corner, SC
View Full Profile had a solid game last year at Auburn, and Auburn lost all but three starters off of the defense from a year ago. This year, Auburn’s defense has been bad – 118th in the nation in rushing defense, 111th in total defense and 103rd in the nation in scoring defense. Morris will also try to run the football, and if Auburn defensive coordinator Ted Roof follows the same pattern he has for years, running lanes should be open. I spoke with Morris this week, and he said that Roof loves to run his base defense - a 4-3 look in Cover 4 or a 4-2-5 (like he did against Miss. St. last week) – which means the defensive backs each take a quarter of the secondary. Roof also runs a lot of multiple looks, but I look for him to run a 4-2-5 with added blitzes on Saturday in an effort to stop Clemson’s speedy receivers while also keeping an eye on Clemson’s runners. Last season, Ellington found the creases in the zone on his way to over 140 yards, while tight end Dwayne Allen

Dwayne Allen
RS Jr. Tight End
#83 6-3, 245
Fayetteville, NC
View Full Profile found holes in the zone on his way to seven catches. Those two will again play a huge part because Roof really only has two solid players he can count on – linebacker Eltoro Freeman and defensive end Nosa Eguae. However, defensive back Neiko Thorpe is a physical player who lined up over Allen a lot last season, and could be tasked with trying to cover either Nuk Hopkins or Sammy Watkins

Tajh Boyd
RS So. Quarterback
#10 6-1, 230
Hampton, VA
View Full Profile finds the holes and takes care of the football , Clemson should be able to pick up yards and points.

Sophomore Cody Parky took over for Wes Byrum as Auburn’s field goal kicker from a season ago, and he has been perfect on all 11 of his kicks in 2011. Two of those are field goals, with a long of 43. The Auburn return game has been solid. Clemson once again appears to have problems in the kicking game – Wofford converted a fake punt last week, there was a failed fake field goal by Clemson, a hold on an extra point was botched and kicker Chandler Catanzaro

Clemson simply has to find a way to win this game, but it’s Auburn that seemingly finds a miraculous way to win almost every week. Auburn head coach Gene Chizik was ridiculed after he was hired away from Iowa St. at the end of 2008, where he compiled a 5-19 record in two seasons. At Auburn, however, he went 8-5 in his first season and followed that with a 14-0 record and a national championship last season, and he has made a habit of leading his team to close wins, and that brings me to my stat of the week. Clemson head coach Dabo Swinney, including his time as interim head coach in 2008- is 3-11 in games decided by a touchdown or less. Chizik is 10-3 in those games during his time at Auburn, which brings a 17-gamewinning streak into Death Valley. Clemson might need to jump on top early and see if they can’t blow Auburn out, otherwise the Chizik magic takes over. Clemson has the talent, the home field advantage, and revenge is a motivating factor. The intangibles are there for a landmark Clemson victory, and even though my heart says the Tigers pull out a close one, logic tells me otherwise.