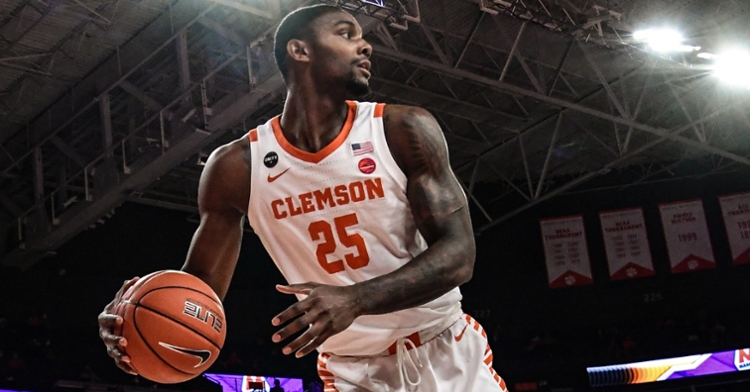 Aamir Simms scored a team-high 18 points and became the 42nd Clemson Tiger in program history to eclipse the 1,000-point mark in his career in the Tigers’ 78-61 win over the Syracuse Orange inside of Littlejohn Coliseum on Saturday afternoon.

“Honestly it’s a blessing. All glory be to God,” Simms said. “It’s definitely been a journey. With this type of program, you definitely have to pay your dues and do the dirty work for a while. When the time comes, you’ll prosper into that player. I think that’s what transpired here with myself and others in the past.”

“It’s definitely a blessing to join those great guys that came before me and kind of paved the way for a guy like me to reach that milestone,” he said.

When Simms put pen to paper on his Letter of Intent to join Brad Brownell and his program, he did so as one of Brownell’s highest ranked recruits in some time. The four-star recruit from Virginia was ranked the third-best player in his state and the 89th-best player overall according to Rivals.com.

The Virginia native scored 135 points during his true freshman year. He scored in double figures three times during the campaign before elevating his game during his sophomore year, scoring 274 points. As a sophomore Simms started all 34 games for the Tigers and dropped a career-high 23 points against Mississippi State.

NBA teams took notice of the junior’s game the following season, leading the Tigers in every statistical category and averaging 13 points a game. His season earned him Third-Team All ACC after scoring 391 points during the shortened “COVID-19” season.

It is no surprise that Brad Brownell sings high praises for his senior leader. Simms has been the “glue” guy of the team the last few seasons and his love and interaction with the community has made him a crowd favorite. Simms will go down in history as a Clemson legend.

“He’s a great player, great person,” Brad Brownell said after the Tigers’ win about Simms. “Really happy he’s being rewarded for all his hard work. He’s worked extremely hard the last two years to improve his game, develop different types of skills and continue to get comfortable doing things he’s never done before.”

Brownell has said this offseason that Simms was always the leader about getting players together to get shots up and was constantly the first-in and last-out guy in the gym.

“You’re (as a coach) are just happy when players who put in the time can reap the rewards,” Brownell said. “It takes a special talent to do the things he can do. He’s one of those guys that can do a lot of different things, his versatility will surely be missed when he’s gone.