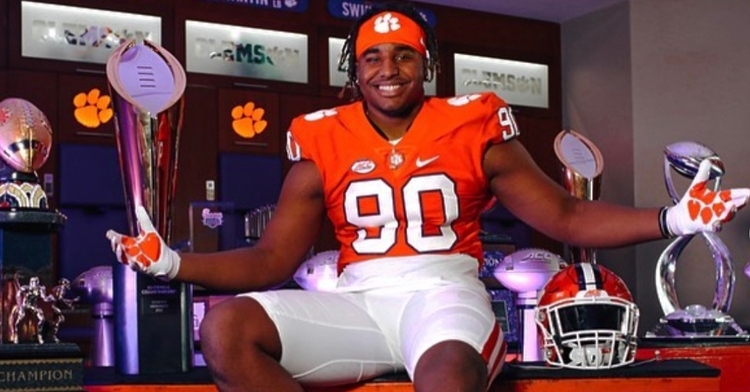 Foreman is one of the top players in the 2021 class.

Five-star defensive end Korey Foreman knows that every little thing he says and does is watched, and he would be the first to tell you that it’s not always easy being one of the top players in the country. That’s why he wants to set the record straight regarding his commitment to Clemson.

Foreman tweeted out this on Saturday: “everybody want to become a 5 star .. until you become one .. then you gotta be the heartbreak kid when it’s all said and done .”

That led to speculation that Foreman is wavering in his commitment to Clemson, and he told TigerNet Sunday that the only issue he has with Clemson or the coaches comes down to official visits.

Back in 2015, 5-star linebacker Shaq Smith de-committed from Clemson so he could take visits, but announced he would attend Clemson at an all-star game in January and wound up enrolling a few days later.

Foreman said he has spoken with the Clemson coaching staff about the policy.

“I’ve talked to the coaches and they have explained how they feel about it,” Foreman said. “They let me know what would happen if I did take a visit. There are some things I need to think about, but that isn’t my main focus. My main focus is the first game of my senior season.”

If Foreman does decide to take visits, Clemson would, of course, be on the list.

“They would still be recruiting me, so yes I would want to go there,” Foreman said. He then told the reasons why he committed in the first place.

“The relationships I have with the coaches there,” Foreman said. “Everything is real there, and I knew when I got there that it was a great place. I loved talking to the coaches and they have a record of putting guys in the league. So I have some things to think about, but really, my focus is on my high school season.”