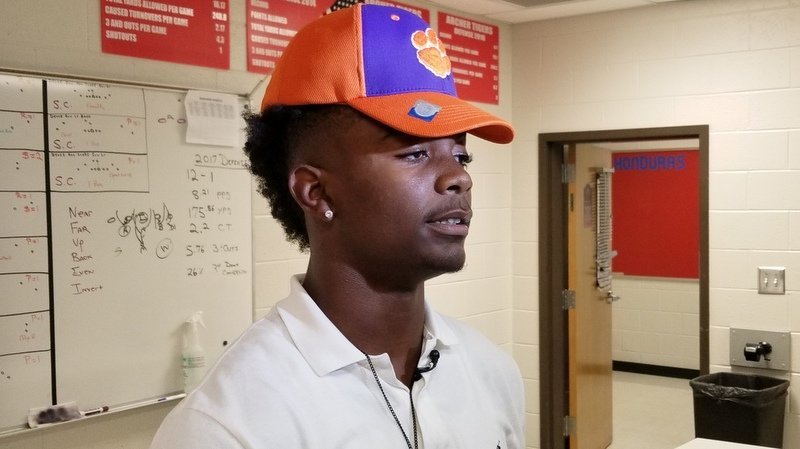 Phillips speaks with the media after Monday's announcement

LAWRENCEVILLE, GA - It’s Jalyn Phillips’ birthday but it is the Clemson coaching staff that received the gift.

Phillips, the 4-star defensive back out of Lawrenceville (GA) Archer, committed to Clemson Monday afternoon in a ceremony at his school. Phillips chose the date because it is his birthday.

Phillips chose Clemson over Alabama and Oklahoma. He had over 50 offers, including the Tide and Sooners, Michigan, Nebraska, Oregon, Notre Dame, Tennessee, and Wisconsin among others.

“It just always felt like home there. I have a good relationship with the whole coaching staff. I just kept visiting there and praying about it. I talked to my family and knew it was home,” Phillips told TigerNet. “I made my decision over summer after praying about it and I knew I wanted to do something special for my birthday, so I just chose that day. It’s great so I can focus on my team. We just came off of a tough loss, so we’re going to get back to work.”

Phillips said the Clemson coaching staff is one of the main reasons he chose the Tigers.

“Dabo (Swinney) is definitely a genuine person. I love going up there and talking to him,” Phillips said. “The whole coaching staff shows me love. I’ve got a great relationship with all of them. With Coach (Mickey) Conn being from Gwinnett and him knowing where I’m coming from, we’ve always been able to relate. Just me talking to him every day kept our relationship close.”

Phillips last visited Clemson in late July for the All In Cookout. His teammate at Archer, 5-star defensive back Andrew Booth, committed to Clemson on July 30.

“It’s crazy. It’s Clemson University for a reason. I’ve always thought about running down the hill,” he said. “I wasn’t really sure going through this crazy recruiting process where I was going and knowing now that it’s Clemson, it’s a dream come true. That’s (Phillips and Booth together at Clemson) going to be something special to see. He knew for a minute where my heart was. I never really told him, he just knew.”

Where does he think he will play at Clemson?

“They said I’m very versatile and can play any position in the secondary, so they’re going to use me as much as they can,” Phillips said.

The Tigers were one of his later offers, but Phillips knew he would wait on the one offer he coveted.

“I just had to stay patient,” he said. “They wanted to see me play free safety because I was playing a little rover position. Them seeing me play free safety and seeing that I can cover and come downhill and hit people. It was definitely a blessing and a dream come true. Oklahoma was my top at first, so after I got the offer it definitely took a lot of prayers and talking with my family.”

Phillips is the 23rd commitment for the Tigers in the 2019 recruiting cycle, the seventh out of the state of Georgia and the sixth defensive back taken in the cycle. The Clemson coaching staff might take as many as 30 this cycle.

Phillips is a talented player https://t.co/QQSPwkm7Gf