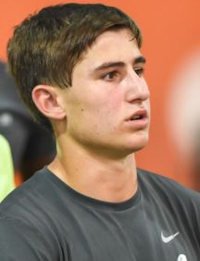 Wide Receiver
B I O
Top receiver for Daniel High School in Clemson, where he had 48 catches for 603 yards and six scores in 2016 ... led team in total receptions, yards and touchdowns ... had at least two receptions in every game in 2016 ... named all-region as a senior, he was team offensive MVP and one of the team captains ... had strong early-season game against rival Seneca with six receptions for 73 yards and a touchdown ... in win over Ninety Six, had career highs in receptions (7), yards (118) and touchdowns (2) ... had longest reception of the year on a 53-yard scoring catch against Wren ... had over 900 all-purpose yards including kick returns ... as a junior had 33 receptions for 420 yards and five touchdowns ... played four years of football, two years of basketball and four years of baseball ... will play baseball at Daniel this spring ... candidate to play slot receiver and serve as holder for the Tigers ... played receiver, cornerback and various positions on special teams, including holder at Daniel ... wore #16 at Daniel ... brother, Drew, also plays for the Lions ... played for Jeff Fruster … son of Clemson head coach Dabo Swinney.